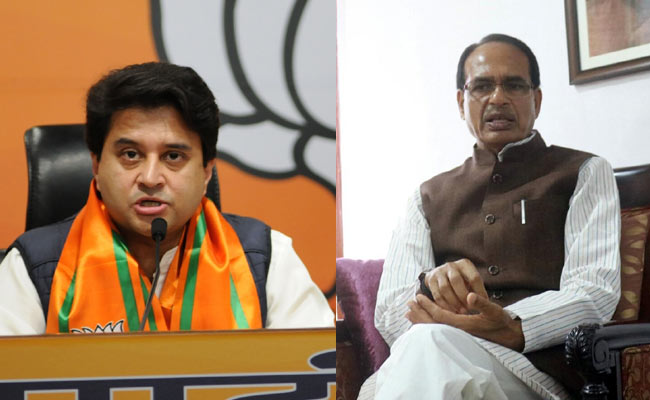 “Scindia belongs to Ravan’s family! See, how shameful of Shivraj to call the new BJP leader Scindia ‘Vibhishan’. First, the Britishers’ friend and now the Ravan’s brother? Did Shivraj bring him to the party for honouring him or take revenge?”

When Jyotiraditya reached the BJP office, Chouhan welcomed him and started narrating the saga of Ramayan. He called Scindia “Vibhishan” in Kalyug’s Ramayan and Kamal Nath “Ravan”

Chouhan explained how Lord Ram conquered Lanka with the help of Vibhishan.

“To set Lanka ablaze, Vibhishan is needed and now Scindia ji is with us,” said Shivraj.

He said, “Cases against farmers have not been withdrawn. The promise was made by the Congress, which has not been fulfilled.”

Mandsaur firing incident took place under Shivraj Singh Chauhan’s rule. When Jyotiraditya mentions Mandsaur, it pains BJP. It seems it will take time for Jyotiraditya to understand the BJP’s stand on the issue.

Peeved withhis marginalisation in the Congress, Scindia met Union Home Minister Amit Shah on March 10 and then the two leaders went to the prime minister’s residence where they held talks for over an hour.

Soon after meeting Prime Minister Narendra Modi, the disgruntled Madhya Pradesh Congress leader tendered his resignation to party president Sonia Gandhi saying it was time for him to move on.

Scindia took the decision to sever his ties with the Congress on the day of his father Madhavrao Scindia’s 75th birth anniversary on March 11 and joined BJP in presence of the ruling party’s president JP Nadda.

On Friday, Scindia filed his nomination in Bhopal for the March 26 Rajya Sabha elections.

Scindia reached the state Assembly secretariat around 2 pm with his supporters and some BJP leaders and submitted his papers to the returning officer, Vidhan Sabha principal secretary A P Singh.

A four-time MP, Scindia first got elected from Guna in Madhya Pradesh in 2002 after winning a bye-election necessitated by his father’s demise. He was only 31 years old at that time.

After the Congress lost the 2014 General Election, Sonia Gandhi named him the party’s chief whip in the Lok Sabha.

Chappell-Hadlee series, Aus tour of NZ postponed due to COVID-19