Jodhpur witnesses repeat of George Floyd like incident, with a twist 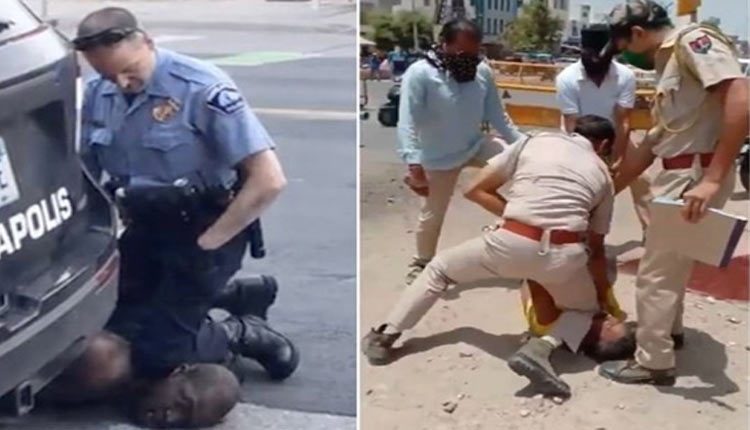 Jaipur: A video has gone viral on social media showing what could be called Jodhpur’s George Floyd moment with a twist, showing cops throwing a person on the ground and pressing his neck with their knees for roaming around without a mask.

However, unlike the unfortunate incident in Minneapolis, Minnesota, the cops in Jodhpur reportedly acted after the person, said to be mentally challenged, turned violent after being confronted by the police.

George Floyd, a 46-year-old black man, died after being arrested by the police outside a shop in Minneapolis in the US on May 25. Footage showed a white officer, Derek Chauvin, kneeling on Floyd’s neck for several minutes while he was pinned to the floor. He was pronounced dead later in the hospital, triggering widespread protests across the US.

However, in the Jodhpur incident, the man, identifed as Mukesh Kumar Prajapat, did not die but instead started fighting with the policemen.

Jodhpur police officers confirmed that the video was shot in the city on Thursday after the police wanted to issue a challan against the man for roaming on the streets without wearing a mask before he started manhandling the police.

The video shows a cop pressing his neck with his knee while two other cops held the young man’s legs. A huge crowd gathered when the scuffle broke out.

Meanwhile, the SHO of Dev Nagar police station, Somkaran, said that the police were issuing a challan to Prajapat when he attacked them and tore their uniform. An FIR has been lodged against Prajapat on a complaint lodged by the Pratap Nagar police station. He will be produced in the court later in the day.

Prajapat is said to be mentally challenged and had damaged his father’s eye earlier for which a case was registered against him, the poice said. Action is being initiated against Prajapat under the Epidemic Act, they added.

Yoga Day to be celebrated on digital media platforms this year