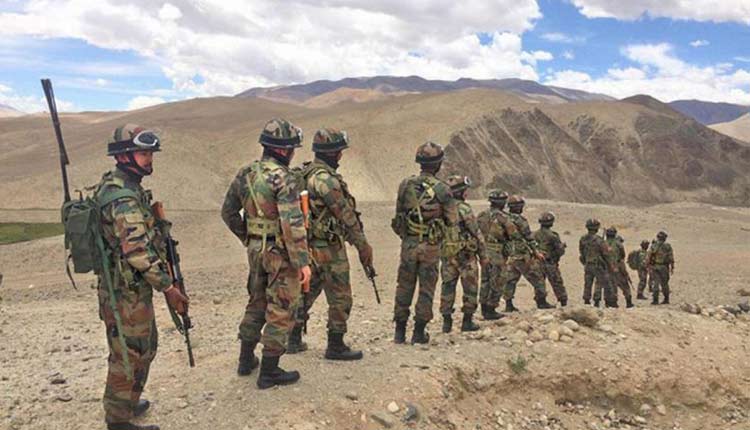 New Delhi: The Indian military conveyed a “very clear” message to the Chinese army during nearly 15-hour-long talks that status quo ante must be restored in eastern Ladakh and it will have to follow all mutually agreed protocols for border management to bring back peace and tranquillity along the Line of Actual Control, government sources said on Wednesday.

During the course of the intense and complex negotiations between senior commanders of the two armies that ended at 2 am on Wednesday, the Indian delegation also apprised the Chinese PLA about the “red lines” and conveyed that the onus was largely on China to improve the overall situation in the region, the sources said.

The two sides agreed on certain modalities for rolling out the next phase of disengagement and are expected to get in touch with each other after discussing agreed points with the higher authorities of both sides, the sources said.

The fourth round of Lt General-level talks began around 11 AM on Tuesday at a designated meeting point in Chushul on the Indian side of the LAC, they said. There was no official word on the outcome of the talks.

The Indian delegation was led by Lt Gen Harinder Singh, the Commander of the Leh-based 14 Corps, while the Chinese side was headed by Major General Liu Lin, Commander of the South Xinjiang military region.

Tuesday’s discussions were the longest negotiations between the two armies after the tense standoff that began on May 5. The third round of Lt General-level talks on June 30 lasted 12 hours. During this round, both sides agreed on an “expeditious, phased and step wise” de-escalation as a “priority” to end the standoff.

The sources said the main focus of the latest round was on finalising a framework for a “time-bound and verifiable” disengagement process from all the friction points like Pangong Tso and Depsang and pulling back large numbers of troops and weapons from rear bases along the LAC as part of modalities for further de-esalation.

“It was clearly conveyed to China that it must follow all the relevant provisions of agreements and protocols that govern management of the border by both the sides,” they said.

The Indian side insisted on “total restoration” of status quo ante in all areas of eastern Ladakh prior to May 5 when the standoff began following a clash between the troops of the two countries in Pangong Tso, they said.

The Indian delegation also conveyed concerns over China’s “new claim lines” in the region, and insisted that Beijing must adhere to earlier framework on carrying out patrolling in the areas, the sources said.

The talks took place days after implementation of the first phase of the disengagement process from the friction points.

China’s People’s Liberation Army (PLA) has already completed pulling back troops from Gogra, Hot Springs and Galwan Valley and significantly thinned down its presence in the ridgeline of Finger Four in the Pangong Tso area in the last one week as demanded by India.

In line with a mutually agreed decision, the two sides created a minimum buffer zone of three kilometres in most of the friction points where they were locked in a standoff.

The formal process of disengagement of troops began on June 6, a day after a nearly two-hour telephonic conversation between National Security Advisor Ajit Doval and Chinese Foreign Minister Wang Yi on ways to bring down tension in the area.

The first round of the Lt General talks was held on June 6 during which both sides finalised an agreement to disengage gradually from all the standoff points beginning with Galwan Valley.

However, the situation deteriorated following the Galwan Valley clashes on June 15 as the two sides significantly bolstered their deployments in most areas along the LAC. The second round of talks took place on June 22.

The Indian and Chinese armies were locked in a bitter standoff in multiple locations in eastern Ladakh for over eight weeks since May 5.

The tension escalated manifold after the violent clashes in Galwan Valley in which 20 Indian Army personnel were killed. The Chinese side also suffered casualties but it is yet to give out the details. According to an American intelligence report, the number of casualties on the Chinese side was 35.

Following the Galwan Valley incident, the government has given the armed forces “full freedom” to give a “befitting” response to any Chinese misadventure along the LAC.

The Army has sent thousands of additional troops to forward locations along the border following the deadly clashes. The IAF has also moved air defence systems as well as a sizable number of its frontline combat jets and attack helicopters to several key air bases.