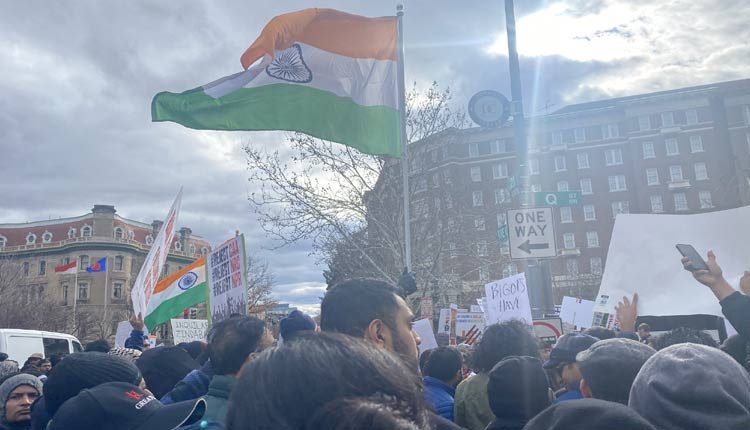 Washington: Indian Americans on Sunday celebrated the 71st Republic Day of their home land across the country with great fervour by hoisting national flag amid singing of national anthem and patriotic songs after gathering in large numbers in various US cities.

Several hundred Indian Americans gathered in front of the Indian Embassy in Washington DC to attend the traditional flag hoisting ceremony by Deputy Indian Ambassador to the US Amit Kumar.

Before hoisting the tricolour amid signing of patriotic songs by students of Gandharva School of Music in Richmond, the Indian diplomat paid floral tributes to the statue of Mahatma Gandhi in front of the embassy. He also addressed the gathering and read out the address of the President of India delivered on the eve of the Republic Day.

Enthusiastic Indian Americans and family members of Indian Embassy officials also enthralled audience by their performance in a cultural programme.

Uncha Sadaa Rahe Jhanda Hamra tweeted Syed Akbaruddin, India’s Permanent Representative to the United Nations along with a picture of him unfurling the tricolour at the India’s permanent mission to the UN in New York.

Honoured to raise the Indian flag during the Republic Day flag ceremony at the India House! 71 years ago the worlds largest democracy emerged and brought forth a culture of unity and acceptance, said Congressman Pete Olson at the Republic Day celebrations in Houston.

As Indians and Indian-Americans across the world celebrate Republic Day today let us dedicate ourselves to the principles of justice, liberty, equality and fraternity, and renew our commitment to each other and our community, said Indian American Congressman Raja Krishnamoorthi.

Wishing the people of India a joyous Republic Day. The US and India are close partners in the Indo-Pacific and our people share unbreakable bonds of friendship, tweeted Alice G Wells, Acting Assistant Secretary of State for South and Central Asia.