Govt Signs Accord With NDFB, ABSU To Resolve Bodo Issue 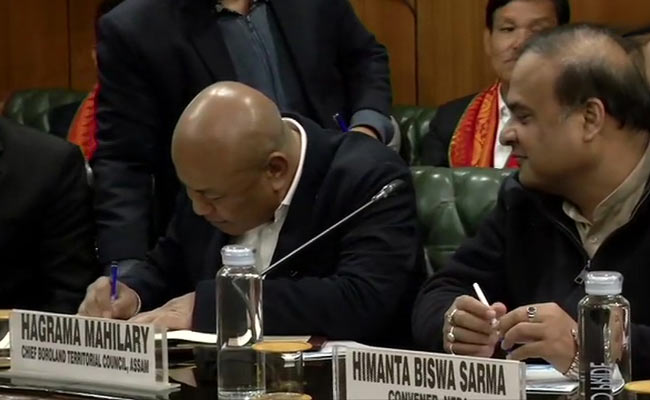 New Delhi: The government on Monday signed an accord with the National Democratic Front of Boroland (NDFB), one of the dreaded insurgent groups of Assam, providing political and economic bonanza sans a separate state or Union Territory.

The All Bodo Students’ Union (ABSU), which has been spearheading a movement for a Bodoland state since 1972, and another group called United Bodo People’s Organisation were also signatories to the accord.

In the presence of Union Home Minister Amit Shah, the tripartite agreement was signed by Assam Chief Minister Sarbananda Sonowal, the top leadership of the four factions of the NDFB, ABSU, Joint Secretary in the Home Ministry Satyendra Garg and Assam Chief Secretary Kumar Sanjay Krishna.

The home minister described the agreement as “historic” and it will bring a permanent solution to the decades-old problems of the Bodo people.

“This agreement will facilitate all-round development of the Bodo areas, their language and culture will be protected without compromising the territorial integrity of Assam,” he said.

The home minister said due to the violence perpetrated by the Bodo militants, over 4,000 people lost their lives in the past few decades.

Shah said no stone would be left unturned for the development of Assam and the Northeastern region.

The Assam chief minister said after the pact, different communities in the state will be able to live with harmony.

“It is a historical accord,” he said.

Assam minister Himanta Biswa Sarma said as per the accord, 1,550 militants belonging to the NDFB lay down their arms on January 30, an economic programme of Rs 1,500 crore will be implemented in the next three years with equal contribution of Rs 750 crore each from the central and state governments.

The existing structure of the Bodoland Territorial Council (BTC) will be strengthened with more powers and its seats will be expanded from 40 to 60, he said.

A commission will be set up for inclusion of Bodo dominated villages in the BTC and exclusion of those where Bodos are not in majority.

This was the third Bodo accord to be signed in last 27 years when the violent movement for a separate Bodoland state claimed hundreds of lives, destruction of public and private properties.

The first Bodo accord was signed with the All Bodo Students Union in 1993, leading to the creation of a Bodoland Autonomous Council with limited political powers.

In 2003, the second Bodo accord was signed with the militant group Bodo Liberation Tigers, leading to the formation of a Bodoland Territorial Council (BTC) with four districts of Assam — Kokrajhar, Chirang, Baska and Udalguri — called Bodoland Territorial Area District (BTAD).

The name of the BTC will be changed to Bodoland Territorial Region (BTR).

The BTC currently has control over 30 subjects like education, forests, horticulture but no jurisdiction over the police, revenue and general administration departments, which are controlled by the Assam government.

The BTC was formed under the 6th Schedule of the Constitution.

The demand for a separate state for the Bodos has been going on in Assam for about five decades and several Bodo overground and militant groups raising it leading to agitations, protests, violence and many deaths.