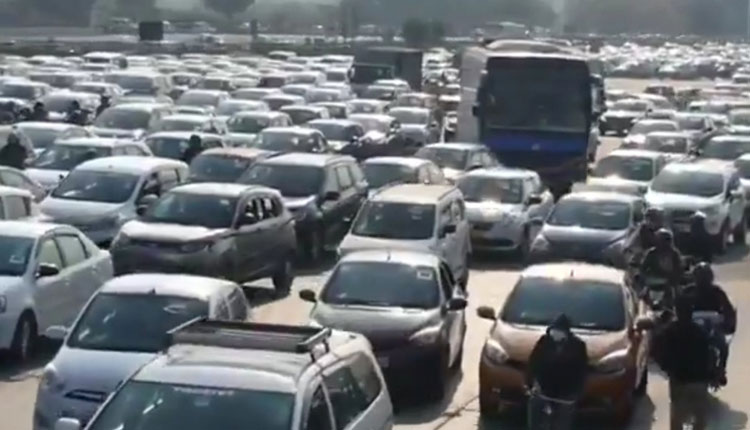 New Delhi: Hundreds of commuters faced traffic snarls on the Delhi-Jaipur Expressway on Friday as Delhi Police put up roadblocks at the interstate border to stop farmers from entering the national capital to hold their protest against the three central agricultural laws.

A large number of security personnel, including those from the central armed police forces, were deployed on the Delhi-Gurugram border.

Though bumper-to-bumper traffic movement was witnessed on the National Highway-48, the situation was much better than Thursday’s traffic chaos.

Officials at the Gurugram traffic control room said that the movement of vehicles on the expressway was slow as the Delhi Police had put up barricades on the Delhi-Gurugram border and near the Rajokri flyover.

“We have made all arrangements to tackle the protest call given by farmers. Police will keep updating the people about the traffic situation in Gurugram through official social media handles,” Gurugram Police Commissioner KK Rao said.

“We have sealed seven entry/exit points in Gurugram to prevent farmers from moving towards Delhi. While regular traffic can pass, police checking is likely to slow it down or lead to jams. More than 1,000 policemen, including senior officers, have been deployed at the borders,” he said.

Chaos at Tikri border as protesters clash with police

Delhi Police had to resort to use of water cannons and tear gas shells to disperse a menacing march of protesting farmers at Tikri border near Delhi-Bahadurgarh highway. The farmers clashed with security forces to breach the national capital borders as they protested against the new Farm laws.

Many farmers at Tikri border were seen trying to break the security ring of paramilitary and Delhi Police, who are loaded with tear gas guns and other measures to halt the marches.

Heavy trucks and trolleys have been placed by Delhi Police in the way of the marchers but these were being pushed, shoved and forced to be removed by farmers. They tied ropes to the trolleys they brought with them to clear the way.