Denial of dignity in death is ultimate sacrilege: IMA on protest over doctor’s cremation 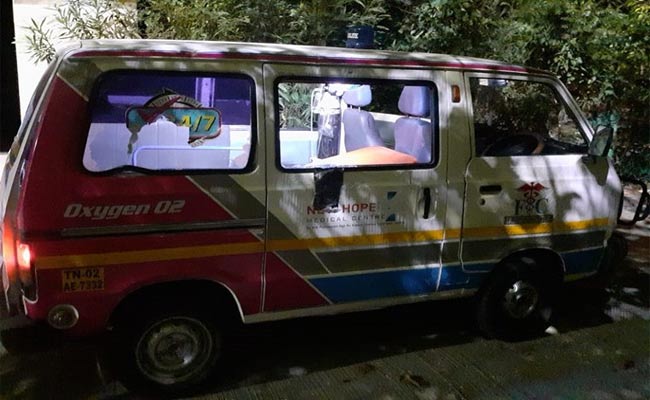 Chennai: In a poignant incident, an orthopaedic surgeon had to bury his associate, a neurosurgeon who died of COVID-19 here, in the middle of the night using his bare hands and a shovel at a crematorium with the help of just two hospital ward boys after the undertakers fled when a mob, protesting the interment, attacked them.

Their opposition was due to a misconception that the contagion may spread in their neighbourhood if the virus victim’s burial took place.

The windscreens of the ambulance in which the body of the 55-year-old neurosurgeon was brought to the crematorium on Sunday night were smashed and even the casket was not spared.

They attacked the undertakers and corporation sanitation officials, among others, using bricks, stones, bottles and sticks and chased them away. Seven people, including two ambulance drivers were assaulted resulting in severe injuries, police said.

The sources said 20 men have been arrested and were remanded to judicial custody.

Recounting with grief the attack that unfolded, Dr K Pradeep Kumar, an orthopaedic and arthroscopy surgeon, told PTI, “This must not happen to anyone be it a doctor or a layman. I have seen people dying but I have not buried anyone and doing it was scary amid fear for our lives.”

Though the private hospital authorities handed over the body to the sanitation officials last night, the ambulance carrying the remains did not start from there.

“When we enquired why we were told that people were opposing and holding a protest near Kilpauk,” Pradeep said.

He drove to that locality in his car to assess the situation and found people had gathered in large numbers and were agitated.

Later, civic body officials made arrangements for burial at another crematorium at nearby Velangadu, and the ambulance headed there.

“It may have been about 15 minutes since the excavator started work to dig a pit, when about 60-70 people armed with stones, bricks and sticks gathered inside the crematorium and began attacking us. The two ambulance drivers who were shifting the body from the vehicle to the ground sustained severe injuries,” Pradeep said.

Also, two sanitation officials who were in charge of the burial were injured severely and three others were also attacked, he said.

To a question, the doctor said there were no police officials around and the wife of the deceased and his teenage son were also forced to leave the crematorium.

“Though injured, the ambulance drivers Dhamu and Anand were brave enough to place the casket again in the vehicle and I asked them to leave the place and I followed them in my car,” he said, adding he escaped from attack due to God’s grace.

The ambulance drivers somehow managed to reach the hospital of the deceased and left the vehicle there.

Dr Pradeep said he picked up personal protective equipment, took two ward boys with him for help and drove the ambulance himself to the crematorium again after seeking police help.

“Both the drivers suffered deep cuts on their scalp, requiring multiple sutures and had contusion too and I got them admitted to Kilpauk government hospital,” he added.

When he reached the crematorium again, the orthopaedic surgeon saw police deployment in the periphery though there were still people out milling around.

“Only an eerie silence and there were none inside the burial ground. The ward boys and I hurriedly lowered the body into the pit as we were afraid that the violence may be repeated.”

Though they placed the body on the ground, they had no one to help them to fill the grave with sand.

“There was just one shovel which I gave to one of the ward boys and two of us used our hands to fill the about 8-10 feet pit.

It took over an hour for us to complete the task and by then it was about 1.30 am (Monday),” he said, adding a policeman lent a helping hand towards the end.

“Even policemen were afraid of coming near us.”

Dr M Arunmozhirajan, a friend of the victim, who had to beat a hasty retreat from the crematorium, said “this is due to ignorance; people need to be educated that a body when buried poses no threat.”

An assistant professor at a government hospital, he wanted authorities to ensure that such instances do not get repeat.

Local Administration Minister S P Velumani said it was inhuman to obstruct the burial of a doctor who worked for the people and assaulting people involved in the burial like corporation workers caused grief.

He asserted that tough action will be taken against such elements and added that those involved in the attack have been arrested.

Health Secretary Beela Rajesh said: “Saluatations to Dr..for his exemplary service in the fight against COVID-19. Let us stand by each and every healthcare worker, they are the real heroes.”

Dr J Amalorpavanathan, formerly convener, Cadaver Transplant Programme, Tamil Nadu government, said “A dead person cannot sneeze or cough or breathe. So all ways of infection spread stops the moment a person dies.Viral replication also stops. Skin may contain viral particles. So long as there is no touch, there is zero per cent chance of infection spread.”

Denial of dignity in death is ultimate sacrilege: IMA on protest over doctor’s cremation

Taking serious note of obstructions to the cremation of a Chennai doctor who died of COVID-19, the Indian Medical Association (IMA) on Monday warned of “appropriate retaliatory measures” if the authorities fail to stop such incidents.

“It is a matter of great concern that these doctors who had died in their line of duty be treated shabbily and in such an uncivilised manner,” the doctors’ body said in a statement, adding if the state governments do not have power to stop such incidents, “they lose their moral right to govern.”

Referring to the violence and attacks faced by the healthcare workers amid the COVID-19 pandemic, the IMA said that it has shown much restraint in spite of extreme provocations.

“That doesn’t mean our patience is endless. Abuse, violence, spitting, pelting of stones, denial of entry to societies and residential accommodation have been tolerated so far since we expected the governments to do their normal duty.”

“When they are unable to discharge their constitutional obligations, perhaps these are not normal times. Denial of dignity in death is the ultimate sacrilege,” IMA National President Rajan Sharma said.

Sharma said that the society must realise that doctors are rendering services at extreme risk to themselves. No nation sends its army to war without weapons.

“Doctors, nurses and healthcare workers of this country have been sent to fight against COVID-19 without PPE kits and they are dying young defending their people. If the value of such services are not realised, the easiest thing for the doctor community will be to sit at home,” he said.

IMA Secretary General R V Asokan said, “While all other interventions have already been withdrawn, it is very unfortunate if more services are going to be withheld for non-medical reasons. The state governments concerned are better warned to perform their constitutional duties as expected.”

“Failing which IMA has no option but to resort to drastic steps to protect the rights of the medical professionals. Appropriate retaliatory measures will be decided if the constitutional machinery breaks down.”