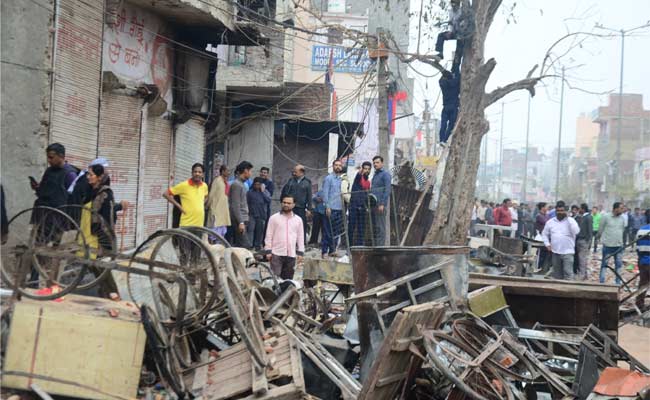 New Delhi: The death toll in the Delhi’s communal violence has gone up to 42 now with four more fatalities being recorded at the city’s GTB Hospital on Friday, officials said.

The number stood at 38 till Thursday. The Guru Teg Bahadur (GTB) Hospital has recorded 38 deaths, the Lok Nayak Jai Prakash hospital three, and the Jag Pravesh Chandra Hospital has reported one.

Nearly 7,000 paramilitary personnel have been deployed in the affected areas of the northeast district since Monday to assist hundreds of Delhi police men and women to maintain peace.

More than 250 people have been injured in the communal clashes. The areas mainly affected include Jafrabad, Maujpur, Chand Bagh, Khureji Khas and Bhajanpura.

Meanwhile, several non-Congress opposition parties have written to President Ram Nath Kovind to direct authorities to ensure peace is restored in violence-hit northeast Delhi and action against those accused of making provocative speeches.

Leaders from parties like NCP, CPI(M), CPI, RJD, LJD, DMK and AAP have also sought time from Kovind to discuss the situation in the national capital.

“Immediate establishment of peace and a direction to authorities concerned, like the Lt Governor of Delhi who is directly answerable to you, to ensure speedy restoration of normalcy and to ensure that FIRs must be filed immediately against all who have made provocative hate speeches and the perpetrators of this violence must be brought to book,” the leaders said in their letter.

The Congress had met the president on Thursday to seek normalcy and peace in areas hit by violence, and had demand Union Home Minister Amit Shah’s resignation.

At least 39 were killed and over 200 injured in the communal clashes that broke out in northeast Delhi on Monday after clashes between citizenship law supporters and protesters spiralled out of control.

The areas worst affected in the violence include Jaffrabad, Maujpur, Chand Bagh, Khureji Khas and Bhajanpura.

The leaders also demanded setting up of relief camps for those who have been rendered homeless and providing them adequate security.

The parties also demanded that they be allowed to organise inter-faith peace events in riot-affected areas.

They also urged the president to facilitate opening of centres in the area to counsel those affected by the violence.

CAA Will Give, Not Take Citizenship; Opposition Instigating People: Amit Shah In Bhubaneswar