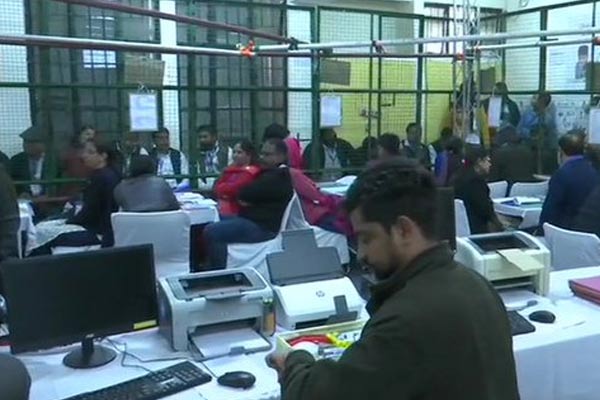 According to poll trends by the Election Commission, the chief minister is leading by over 6,300 votes while Sisodia is trailing by 754 votes from Patparganj constituency.

According to the EC website, the ruling Aam Aadmi Party (AAP) is leading in 57 seats, while the BJP is ahead in 13.

In the 2015 assembly elections, the AAP had registered a thumping victory by winning 67 seats in the 70-member Delhi Assembly.

Counting of votes polled in the high-stakes Delhi Assembly election began on Tuesday morning amid tight security at various centres set up to carry out the exercise.

Exit polls have predicted a big win for the ruling Aam Aadmi Party, but the Bharatiya Janata Party leaders maintained that the surveys would fall flat.

The counting began at 8 am and will be held in multiple rounds, Delhi Chief Electoral Officer (CEO) Ranbir Singh said.

“Elaborate security arrangements have been put in place. The exercise is being carried out as per the laid-down procedures of the Election Commission,” Singh said.

Tight security arrangements have been put in place at various centres across Delhi, he said.

“The counting centres are spread across 21 locations, spanning the 70 constituencies. Each centre has several counting halls, equal to the number of constituencies falling in that district,” he said.

Each EVM consists of a ballot unit (BU), a controls units (CU) and a voter-verifiable paper audit trail (VVPAT.)

After counting of votes through CUs from every assembly constituency, five VVPATs will be randomly selected and they will be counted, the official said.

The election, largely seen as a battle between the AAP and the BJP, was held on Saturday, sealing the fate of 672 candidates — 593 men and 79 women.

Nearly 24 hours after the polling ended in Delhi, the Election Commission on Sunday announced that the final voter turnout was 62.59 per cent, five per cent less than 2015, and asserted that it followed the laid down process to compile data, after the AAP questioned the “delay”.

There were 13,780 polling booths where every vote was accounted for by the presiding officers, which is a time-consuming exercise, Sandeep Saxena, senior deputy election commissioner, said at a press conference on Sunday.

The AAP had routed rival parties in the last Assembly polls, bagging 67 seats while the BJP was reduced to mere three seats and the Congress had drawn a blank.

Social Media Buzz With UCC Bill To Be Introduced On Tuesday