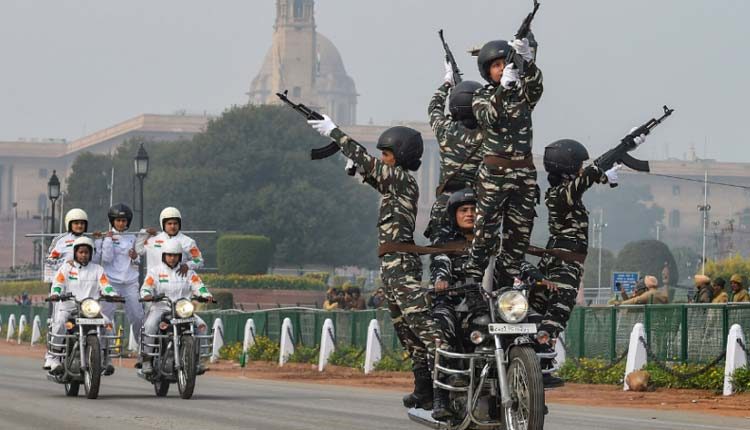 New Delhi: “Now the real one comes, let us go in the front,” said the crowd sitting on the back benches at Rajpath on the occasion of Republic Day after finding that a contingent of women bikers of Central Reserve Police Force (CRPF) will perform daredevil stunts.

Defying security personnel, spectators moved ahead to take glimpse of a contingent of women bikers of CRPF, which performed daredevil stunts, for the first time. Even security personnel could not resist themselves to see the performance of the contingent led by Inspector Seema Nag who saluted the dais while standing atop a moving motorcycle.

The bikers performed several daring acts on moving bikes before a human pyramid on multiple motorcycles brought up the rear.

Head Constable Meena Chaudhary displayed the ready position to fire two 9mm pistols in both her hands while balancing herself amazingly on her motorcycle. Thereafter four daredevils donning the different uniforms worn by the force balanced themselves on a single bike. The formation was led by Head Constable Katke Lata.

Then came four daredevils in which three of them aimed rifles in different directions while riding a solo motorcycle. The CRPF flag march by seven daredevil women riders left the spectators mesmerized.

The people did not leave the place till the time the women bikers displayed their daredevilry. Assistant Sub-Inspector Sujata Goswami with five of her teammates sped down the Rajpath displaying their daring formation All Round Defence where four of them point their rifles in four directions while fifth one scans the surroundings with binoculars.

Then came two motorcycles supported by a beam in the hand of the women bikers. The formation was led by Head Constable Asha Kumari. In another formation, Head Constable Sangita Kumari was seen climbing up and down a ladder that was balanced on her motorcycle which was racing down the Rajpath.

In the end, pushing the limits of machine and human endurance, a 21-women daredevils on five motorcycles made a human pyramid leaving the spectators in awe.