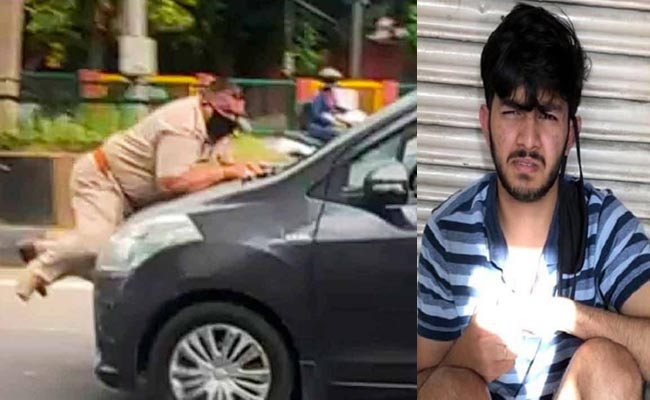 Chandigarh: An assistant sub-inspector of the Punjab Police was dragged on the bonnet of a car after he tried to stop the driver at a checkpoint in Jalandhar on Saturday amid the ongoing COVID-19 lockdown.

ASI Mulkh Raj was dragged for some distance but escaped unhurt while the car driver, Anmol Mehmi (20) was nabbed by the police and public.

Mehmi was asked to stop at a police check post near Milk Bar chowk but he tried to get away. The ASI was in front of the vehicle and had no choice but to jump on the bonnet to save his life, Jalandhar Police commissioner Gurpreet Singh Bhullar said.

Police have booked Mehmi and his father (owner of the vehicle) under relevant sections including 307 (attempt to murder) of the IPC, the Epidemic Diseases Act and the Disaster Management Act. They are residents of Nakodar road in Jalandhar.

Bhullar said there is zero-tolerance policy towards such acts committed against government officials deputed on curfew duty. He also warned of stern action against any individual indulging in such crimes.

The incident comes close on the heels of the brutal attack on a policeman wherein his hand was chopped off by a group of Nihang Sikhs while enforcing coronavirus lockdown in Patiala on April 12.

As reported earlier, a group of five armed Nihangs, who were travelling in a vehicle, were stopped at a vegetable market and were asked to show their curfew passes which angered them and they attacked the police personnel and government employees with sharp-edged weapons.

The video of the crime went viral in which it was seen Nihangs breaking barricades and attacking policemen. The chopping off of hands of ASI Harjit Singh‘s was also seen.

After the crime, the Nihangs fled. They were arrested from the Nihang Dera Complex that also houses Khichdi Sahib Gurdwara after a stand-off with the police party, led by Inspector General Jatinder Aulakh and Senior Superintendent of Police Mandeep Sidhu.

Later, the 50-year-old patient had an amputation through the proximal wrist of the left hand, said the PGI. All the nerves at the wrist required bony fixation done using three K-wires. The approximate time taken was about 7.5 hours.

After nearly eight hours of surgery, a team of doctors at the Post Graduate Institute of Medical Education and Research (PGIMER) in Chandigarh successfully re-implanted the severed left hand.

No Subsidy For Domestic LPG Customers Onwards May