Congress Lauds Narasimha Rao As ‘Pride Of The Party’ 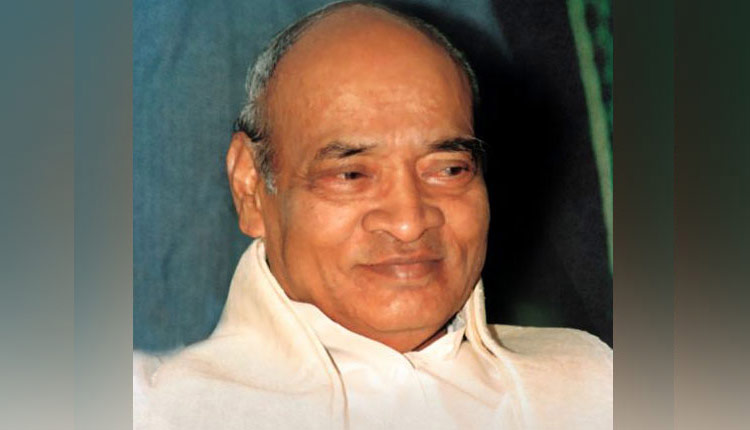 Hyderabad: Describing former Prime Minister P V Narasimha Rao as a dedicated Congress leader, AICC President Sonia Gandhi on Friday said the grand old party takes pride in his accomplishments and contribution, even as another former Prime Minister Manmohan Singh praised him as a “great son” of this country.

“Shri P V Narasimha Rao’s tenure was also marked by a number of political, social and foreign policy achievements that have endured.

Above all he was a dedicated Congressman who served the party devotedly in various capacities,” she said in a message read out by Telangana Congress President Uttam Kumar Reddy.

The Telangana Congress began its year-long birth centenary celebrations of Rao on July 24 commemorating the day when the first budget claimed to be the first attempt towards economic reforms in the country was presented by his government in 1991.

The Congress party takes pride in his many accomplishments and contributions.

The birth centenary of Rao is an occasion to recall and pay tribute to a most scholarly and erudite personality who after a long career in state and national politics, the Prime Minister of the country at a time of “grave economic crisis”, Sonia Gandhi added.

She noted that the union budget of July 24 1991, paved the way for the economic transformation of the country.

Former President Pranab Mukherjee, in his recorded address, said Rao was known for his path-breaking ability to do something which sometimes appeared to be impossible to do.

When he was Chief Minister of Andhra Pradesh (undivided), he introduced massive land reforms in this state, which was an act of “courage of conviction,” Mukherjee said.

“P V Narasimha Rao became India’s Prime Minister at a crucial time. Not only in the economy, but the situation was such that India’s foreign exchange reserves plummeted to just USD one billion, which was well enough to support two weeks’ imports,” he said.

Rao was the second Prime Minister in this country to introduce radical reforms in Indian economy to unleash the potentiality of growth, he added.

Mukherjee said Rao had the capacity to recognise the need of having peaceful coexistence with China, which has a long border stretching from the Northeast to Ladakh.

“To engage peace and tranquility in the border area was first mooted by him. And thereafter it was implemented by successive Prime Ministers,” the former President said.

Manmohan Singh, in his address, said the former Prime Minister can truly be called the father of economic reforms in India.

“Economic reforms and liberalisation were indeed his (Rao’s) biggest contributions.

His contributions to the country in several different fields cannot be underestimated.

On the foreign affairs front, he made efforts to improve our relationship with our neighbours including China,” Singh said.

Recalling his association with Narasimha Rao, Dr Singh said the budget he presented under Rao’s leadership in 1991 had changed the country in many ways in terms of economic reforms and liberalisation.

Lauding Rao’s political acumen, the former Prime Minister said though it was hard to take decisions to meet the challenging situations for a minority government, the then Prime Minister Rao was able to carry everyone along, convincing them with his convictions.

Congress leader Rahul Gandhi, in his message, said Rao had a remarkable political journey which would reflect his grit and determination.

Meanwhile, N V Subhash, a grandson of Rao and BJP spokesperson in Telangana, slammed the Congress for allegedly confining the birth centenary celebrations to Telangana and for ignoring him for long.

The Congress organised the celebrations for namesake, Subhash alleged in a statement here.

It showed how serious the Congress leadership was to organise a small function for PV and his birth centenary celebrations, he said.

Subhash asked why the Congress was silent all these years following the demise of Rao without organising a single event in memory of the former Prime Minister who is revered as the father of economic reforms in India.

Holding the celebrations was nothing but a drama enacted by the Congress to own the lost legacy of Rao, he said.

PV was Prime Minister for the whole of India, not for Telangana alone. Keeping this in mind, the Congress has to answer our questions as to why they ignored him for a long time, Subhash said.

The Congress high command should organise the celebrations by setting up a committee at the national-level to spread his ideals to the younger generation, he said.

The high command finally gave its consent to organise the celebrations only after local Congress leaders exerted pressure, he said.

The Congress has ignored its own leader, who held the highest position in the party as AICC president and the Prime Minister of the country, he said.

Even though he was the leader of an opposition party, the Modi Government has built a memorial in Ektha Sthal in Delhi and released a postal stamp in memory of Rao, Subhash said.

Telangana Chief Minister K Chandrasekhar Rao had announced that he would lead a delegation to Prime Minister Narendra Modi to request him to announce Bharat Ratna for the former Prime Minister.