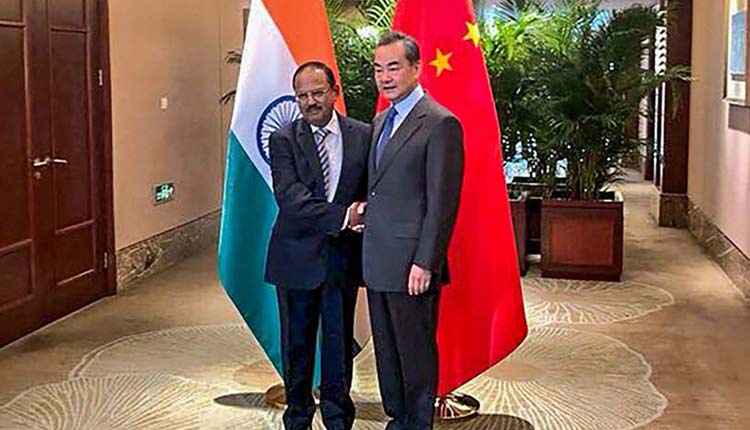 New Delhi: In what is being perceived to be a thaw in the India-China face-off in Eastern Ladakh’s Galwan Valley, the Special Representatives of India and China on the Boundary Question – Ajit Doval, National Security Advisor of India and Wang Yi, State Councillor and Minister of Foreign Affairs of China spoke on the telephone.

In their conversation on Sunday, the two Special Representatives had a frank and in-depth exchange of views on the recent developments in the Western Sector of the India-China border areas.

They agreed that both sides should take guidance from the consensus of the leaders that maintenance of peace and tranquillity in the India-China border areas was essential for the further development of our bilateral relations and that two sides should not allow differences to become disputes. So it was necessary to ensure at the earliest complete disengagement of the troops along the LAC and de-escalation from India-China border areas for full restoration of peace and tranquillity.

In this regard they further agreed that both sides should complete the ongoing disengagement process along the LAC expeditiously. The two sides should also ensure a phased and stepwise de-escalation in the India-China border areas.

They re-affirmed that both sides should strictly respect and observe the Line of Actual Control and should not take any unilateral action to alter the status quo and work together to avoid any incident in the future that could disturb peace and tranquillity in border areas.

The two Special Representatives agreed that the diplomatic and military officials of the two sides should continue their discussions, including under the framework of the Working Mechanism for Consultation and Coordination on India-China border affairs (WMCC), and implement the understandings reached in a timely manner to achieve the above outcomes.

It was also agreed that the two Special Representatives will continue their conversations to ensure full and enduring restoration of peace and tranquillity in the India-China border areas in accordance with the bilateral agreements and protocols.

The two sides exchanged frank and in-depth views on easing the current state of affairs between the two countries’ borders and reached a positive consensus, the statement said.

1. The two sides agree to follow the important consensus reached by the leaders of the two countries and believe that maintaining peace and tranquility in the border area is crucial to the long-term development of bilateral relations. The border issue should be placed in an appropriate position in bilateral relations to avoid the rise of differences into disputes.

2. The two sides reaffirmed their observance of a series of agreements signed by the two countries on the border issue and worked together to ease the situation in the border areas.

3. The two sides agreed to strengthen communication through the special representative meeting mechanism, hold non-stop meetings on the China-India Border Affairs Consultation and Coordination Working Mechanism, and constantly improve and strengthen confidence-building measures in the border area to avoid recurring incidents that affect peace and tranquility in the border area.

4. The two sides welcome the progress made in the recent military and diplomatic meeting between the two countries and agree to continue the dialogue and consultations, and emphasize that the consensus reached at the level of the two border defence forces at the military level should be implemented as quickly as possible to complete the disengagement process of the front-line forces of both sides as soon as possible.