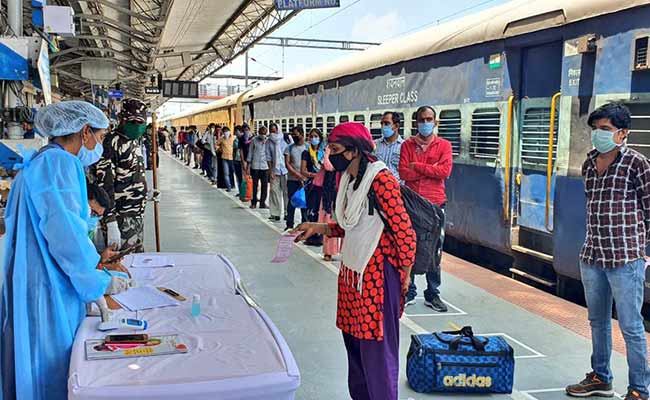 New Delhi: The Centre on Tuesday issued a Standard Operating Procedure (SOP) for transportation of stranded migrant workers between states, which will designate nodal authorities and make necessary arrangements for receiving and sending them, amid the novel coronavirus-induced lockdown.

While issuing the revised SOP, Union Home Secretary Ajay Bhalla said for running ‘Shramik’ special trains, permission will be given by the Ministry of Railways (MOR) in consultation with the Ministry of Home Affairs (MHA).

However, the guidelines issued by the Ministry of Railways on May 2 for ‘Shramik’ special trains said: “The consent of receiving state shall be obtained by originating state, and a copy provided to Railways before departure of train”.

According to the fresh SOP, the train schedule, including stoppages and destination, shall be finalised by the MOR based on the requirements of states and UTs, and shall be communicated by the MOR to states and UTs for making suitable arrangements for sending and receiving such stranded workers.

Officials explained that the MOR will ensure more halts of the special trains for the convenience of migrant workers.

The SOP said the train schedule, protocols for entry and movement of passengers, services to be provided in coaches, and arrangements with states and UTs for booking of tickets shall be publicised by the MOR.

Sending states and UTs, and the MOR will ensure that passengers are compulsorily screened, and only asymptomatic passengers are allowed to board the trains, it said.

During boarding and travel, all passengers will have to observe social distancing.

On their arrival, passengers will have to adhere to health protocols prescribed by the destination state or UT, the SOP said.

In a separate communication to states, the union home ministry asked states and the UTs to operate more ‘Shramik’ special trains in close coordination with the Railways and said special attention should be given to women, children and the elderly.

In his communication to state governments and UT administrations, the Union Home Secretary Bhalla said fear of COVID-19 infection and apprehension of loss of livelihood are the main driving factors for the movement of stranded workers to their homes.

“In order to mitigate the distress of migrant workers, I would be grateful if the following measures could be implemented,” he said in the letter issued on Monday.

The home secretary suggested that more special trains should be arranged through proactive coordination between states and the MOR.

He also said the arrangement of places to rest, taking into account requirement of sanitation, food and health, should be made.

There should be more clarity about departure of trains and buses, as lack of clarity coupled with rumours has caused unrest among migrant workers, he said.

Special attention should be given to the specific requirements of women, children and the elderly, among the migrant workers, Bhalla said.

District authorities may guide workers moving on foot to designated rest places, nearby bus terminals or railway stations by arranging transportation, enlist them with their addresses and contact numbers, which may be helpful in contact tracing in due course and involvement of NGO representatives, he said.

Bhalla said steps should be taken for the alleviation of the notion of long quarantine at rest places by district authorities or NGO workers.

Increase in number of buses for transporting migrants are some other measures suggested, he said.

Besides, entry of buses carrying migrants at inter-state border, adequate arrangement of food, health care and counselling to encourage them to remain at places where they are should also be made, Bhalla added.

The home secretary asked states and UTs to give directions to the district authorities to request the MOR for running trains, where required, and ensure that no migrant worker has to resort to walking on roads or railway tracks to reach destination.

We would be happy to facilitate the process further, Bhalla said.

The home secretary reminded states and UTs of his April 29 order that states and UTs falling on the transit route will allow the passage of migrant workers to the receiving state and UT.

“I would be grateful for your cooperation in pro-active monitoring and resolution of the situation,” Bhalla said

Movement of migrant workers during the lockdown has become a humanitarian crisis with thousands of them being seen walking on roads and railway tracks ignoring government pleas to stay back at the place where they are.

At least 16 such people were mowed down by a goods train in Maharashtra, while at least 100 others were killed in road accidents in different parts of the country.

The railways have so far run around 1,500 ‘Shramik’ trains since May 1, ferrying over 17 lakh people from various parts of the country to different destinations.

Corona-Free Bhubaneswar Back On COVID Map, Cop Among Positives