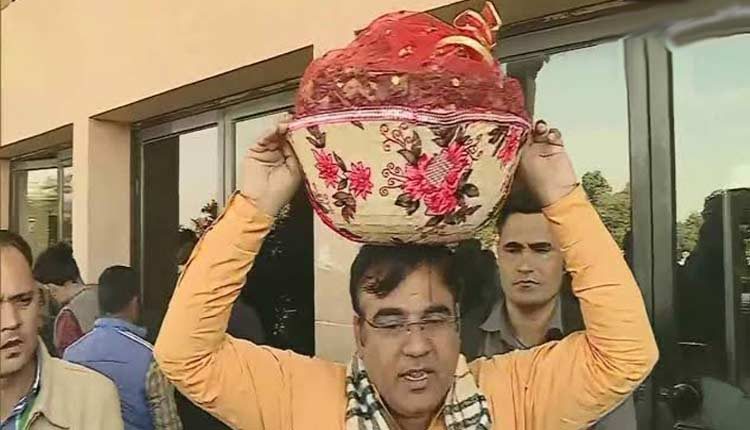 Jaipur: In a symbolic protest, a BJP MLA in Rajasthan entered the Vidhan Sabha premises carrying a basket full of locusts on Friday and asked the state government to expedite the distribution of compensation to farmers who have suffered losses in the insect attack.

Eleven districts of the state are facing the worst locust attack after 26 years. Control measures have been undertaken on 3.70 lakh hectares of affected land, according to officials.

“The seriousness of the government is not visible in addressing the issue of locust attack in western Rajasthan that has damaged crops on lakhs of hectares of land,” Nokha (Bikaner) MLA Bihari Lal told reporters.

“Instead of taking the issue very seriously, the government is focused against the Citizenship (Amendment) Act.

“The farmers have suffered huge losses due to the locust attack and the government should expedite the compensation distribution process,” he said.

He said the Congress government in the state is not serious about real issues.

“The Congress government in Rajasthan is not serious about real issues. Farmers are suffering, huge losses have occurred due to the locust attack.

“The government should immediately shift its focus to address the issue in the interest of the farmers, he added.

He entered the assembly premises with the basket but did not go inside the house with it.

WEF 2020 Meeting Ends With Hopes For Better And Cleaner Economy

No Road, No Ambulance: People In This Odisha Village Allege…

Taxes On Petrol, Diesel May Go Up Further To Mobilise…

Samantha Akkineni Shares Her Love Story That Developed Amid…