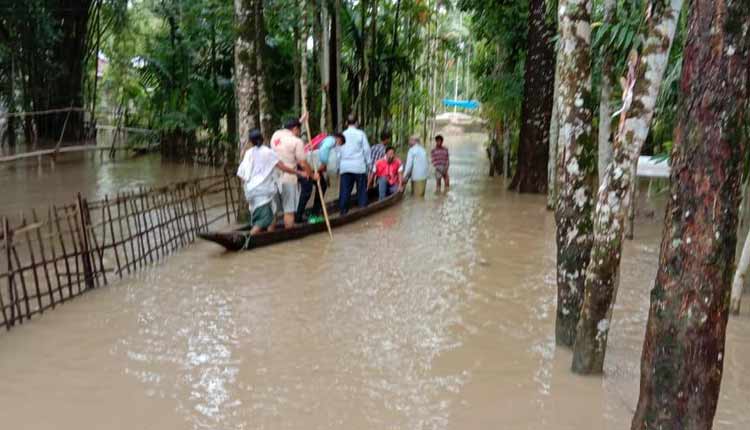 With two more deaths, the fatalities due to flood this year has gone up to 18.

Barpeta has emerged as the worst-hit district with nearly 1.35 lakh people having been affected, followed by Dhemaji with almost one lakh people and Nalbari with more than 96,000 persons hit by this natural calamity.

Till Saturday, more than 4.6 lakh persons were affected due to the deluge across 21 districts.

It further said authorities are running 193 relief camps and distribution centres across 12 districts, where 27,308 people have taken shelter.

The authorities have distributed a total of 1,206.32 quintals of rice, dal and salt, and 2,195.92 litres of mustard oil along with other relief materials such as tarpaulin, baby food, snacks, candle, matchbox, drinking water, milk, biscuit and mosquito coil.

The Brahmaputra is flowing above the danger mark at Guwahati, Nimatighat in Jorhat, Tezpur in Sonitpur, Goalpara town in Goalpara and Dhubri town in Dhubri districts.

Massive erosions have been witnessed at different places of Biswanath district, ASDMA said.

ASDMA also said that a total of 92 camps out of 183 are affected due to flood at Kaziranga National Park.

The flood has also affected 15,27,832 domestic animals and poultry across the state, it added.

Tribes India E-Mart: An E-Marketplace Only For Tribal Sellers