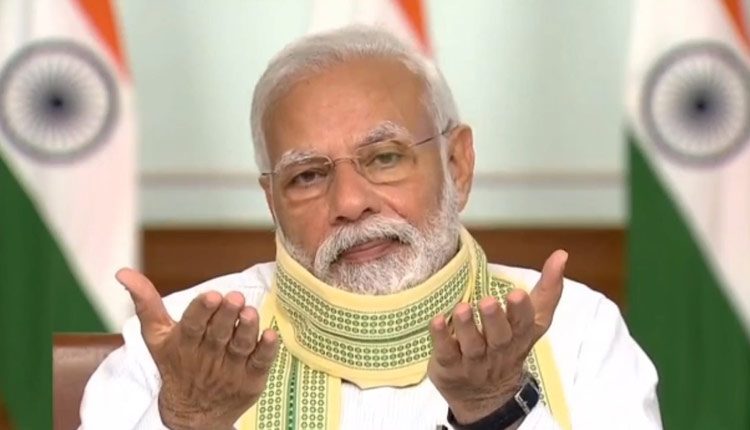 New Delhi: Prime Minister Narendra Modi on Saturday listed abrogation of Article 370, settlement of the Ram Temple issue, criminalization of Triple Talaq and the amendment to the Citizenship Act among the key achievements during his second term, asserting that his government’s decisions in the last one year were aimed at fulfilling the dream of making India a global leader.

In an open letter to the country’s citizens on the first anniversary of his second term as Prime Minister, Narendra Modi said in 2019 the people of India voted not merely for continuity but also with the dream of taking India to new heights and making it a global leader.

The decisions taken in the last one year are directed at fulfilling this dream, he said.

In the last one year, some of the decisions were widely discussed and remain etched in public discourse, Modi said.

“Article 370 (abrogation) furthered the spirit of national unity and integration,” he said of the Centre’s decision to abrogate Jammu and Kashmir’s special status under Article 370 of the Constitution and bifurcation of the state into Union Territories in August last year.

Penned a letter to my fellow citizens.

It takes you through the year gone by and the way ahead. https://t.co/t1uHcAKkAH pic.twitter.com/Ci8TImK3CU

Referring to the Supreme Court’s unanimous judgement on the Ram temple in Ayodhya, Modi said it brought an amicable end to a debate persisting for centuries.

The Supreme Court, in a landmark verdict in the Babri Masjid-Ram Janmabhoomi title case last year, paved the way for construction of the Ram temple in Ayodhya.

“The barbaric practice of Triple Talaq has been confined to the dustbin of history,” Modi said in reference to the legislation last year that made giving instant oral triple talaq or talalq-e-biddat a criminal offence with provisions of jail term up to three years.

Referring to the amendment to the Citizenship Act, Modi said it was an “expression of India’s compassion and spirit of inclusiveness”.

The Citizenship (Amendment) Act (CAA) seeks to grant citizenship to non-Muslims from three neighbouring Muslim majority countries on the ground of religious persecution. Its passage last year had prompted intense protests in various parts of the country with the Opposition parties and social groups alleging that it was discriminatory.

Listing other key decisions of his government that added “momentum to the nation’s development trajectory”, Modi said the creation of the post of the Chief of Defence Staff was a long-pending reform that has improved coordination among the armed forces.

At the same time, India has stepped up preparations for Mission Gaganyaan, he said.

“Empowering the poor, farmers, women, and youth has remained our priority. PM Kisan Samman Nidhi now includes all farmers. In just one year, more than Rs 72,000 crore has been deposited in the accounts of over 9 crore 50 lakh farmers,” Modi said.

The Jal Jeevan Mission will ensure supply of potable drinking water through piped connections to over 15 crore rural households, he said.

Modi said a huge campaign for free vaccination is being conducted for better health of the country’s 50 crore livestock.

“For the first time in our country’s history, farmers, farm labourers, small shopkeepers and workers in unorganized sector are assured the provision of regular monthly pension of Rs 3,000 after the age of 60 years,” he said.

Besides the facility of availing bank loans, a separate department has also been created for fishermen, the prime minister said, enumerating the steps taken by his government.

Several other decisions have been taken to strengthen the fisheries sector which will boost the blue economy, he said.

“It has been decided to constitute a Vyapari Kalyan Board for timely resolution of the problems of the traders. Higher quantum of financial assistance is being provided to more than 7 crore women attached to self help groups,” Modi said in his letter.

Recently the amount for loans without guarantee for self-help groups has been doubled to Rs 20 lakh from the earlier Rs 10 lakh, he said.

“Keeping in mind the education of tribal children, we have begun the construction of more than 400 new Eklavya Model Residential Schools,” Modi said.

Asserting that several people-friendly laws have been ushered in during the last year, the prime minister said Parliament has broken the decades-old record in terms of productivity.

“As a result, whether it be the Consumer Protection Act, the amendment to Chit Fund Law or laws to provide more protection to women, children and Divyang, their passage in the Parliament was expedited,” he said.

As a result of the policies and decisions of the government, the rural-urban gap is shrinking, Modi said, adding that “for the first time, the number of rural Indians using the internet is 10 percent more than the number of urban Indians”.

“The list of such historic actions and decisions taken in national interest would be too long to detail in this letter. But I must say that every day of this year, my government has worked round the clock with full vigor, taking and implementing these decisions,” Modi said.

Today, 130 crore people feel involved and integrated in the development trajectory of the nation, the prime minister said.

“The light of Jan Shakti’ and Rashtra Shakti’ has ignited the entire nation. Powered by the Mantra of Sabka Saath, Sabka Vikas, Sabka Vishwas’ India is marching forward in all spheres,” he said.