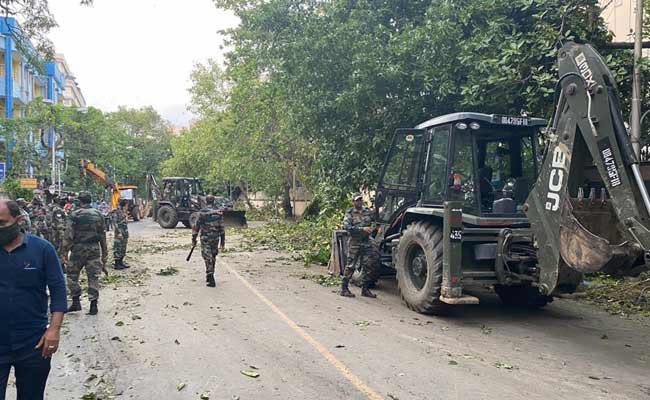 New Delhi: The Indian Army rushed five columns to West Bengal on Saturday to help the state in carrying out relief and rescue operations after cyclone Amphan wreaked havoc in the eastern state, a senior officer said.

In a statement, the Army said: “Based on the West Bengal government’s request, the Army has provided five columns to assist the Kolkata City civil administration in the aftermath of cyclone Amphan.

It stated: “On receipt of a written request from Principal Secretary Disaster Management and Civil Defence, Government of West Bengal, for the deployment of additional teams, ten additional NDRF teams have been mobilized and are being rushed at the earliest from NDRF locations outside West Bengal.”

The teams are likely to reach Kolkata late Saturday night.

The Centre on Saturday mobilized 10 additional NDRF teams in the state for restoration work.

“Ten additional NDRF teams have been mobilized and are being rushed at the earliest from NDRF locations outside West Bengal. Teams are likely to reach Kolkata by late night today (Saturday),” the official added.

Presently 26 NDRF teams are deployed in cyclone-affected areas of West Bengal for restoration work as hundreds of houses were destroyed and embankments were breached at many places due to the Amphan’s march in the state, leaving scores of villages swimming in misery.

The additional deployment of 10 teams will bring the total deployment to 36 teams of NDRF across the six most affected districts of West Bengal by Amphan which fizzled out in Bangladesh on Thursday morning after leaving a trail of destruction across a wide swathe of West Bengal and Odisha. Roads and various public utilities worth hundreds of crores were damaged in West Bengal.

The NDRF teams evacuated over 7 lakh people — 5 lakh from West Bengal and 2 lakh from Odisha — before the cyclone made its landfall on Wednesday afternoon.

The cyclone left scores of people dead and devastated various coastal cities and towns after it made landfall on Wednesday, lashing coastal areas with high-speed wind and rain.

The death toll due to the cyclone in West Bengal has risen to 85.

The residents in Kolkata have resorted to protest and road blockades over the state administration’s alleged failure to restore normalcy even after three days.

The West Bengal government had sought the help of the Army and other forces to carry out relief operations. In a statement on social media, the state government said that they have mobilized maximum strength in unified command mode on 24X7 basis for the restoration of essential infrastructure and services as soon as possible.

It further pointed out: “The Army support has been called for; NDRF and SDRF teams deployed; Railways, Port and private sector too requested to supply teams and equipment.”

The state government said that the drinking water and drainage infrastructure was getting restored fast. “Public Health Engineering Department asked to supply water pouches in gap pockets. Generators being hired where necessary. More than a hundred teams from multiple departments and bodies working for cutting of fallen trees, which is the key to the restoration of power in localities,” the Home Department said in a series of tweets.

It also stated that West Bengal State Electricity Distribution Company and Calcutta Electric Supply Corporation had been asked to deploy maximum manpower, even while lockdown significantly affects the deployment potential of the latter. “Police is also on high alert,” the government said.