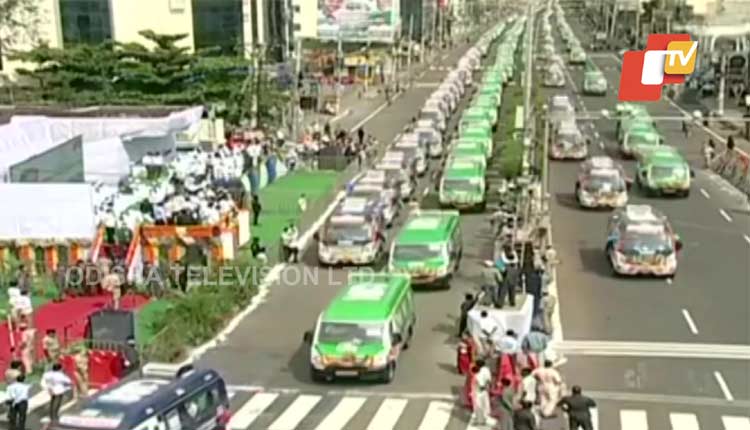 It also inducted 656 new mobile medical units under the 104 service.

Chief Minister YS Jagan Mohan Reddy flagged off the new fleet from Vijayawada and called it a “golden-letter day” in the state’s history.

The 108 and 104 services were first introduced by Jagan’s late father Y S Rajasekhara Reddy when he was the Chief Minister of erstwhile unified Andhra Pradesh from 2004 to 2009.

The state will now have a total of 748 ambulances, including 336 now running.

Additionally, each of the 13 districts in the state will get two 108 ambulances exclusively to attend to neo-natal emergencies and reduce infant mortality.

The ALS ambulances will have a defibrillator, transport ventilator, spine board to provide emergency treatment to critical patients while being taken to the nearest hospital.

Deputy Chief Minister (Health) A K K Srinivas (Nani) said each 104 vehicle would cover every village in a particular mandal at least once in a month.

“Apart from conducting regular medical tests on villagers, 72 varieties of medicines will also be kept available in each mobile medical unit for distribution to the needy patients,” Nani said.

The Chief Minister, on the occasion, announced enhancement of wages to the 108 and 104 ambulance service drivers and technical staff.

Jagan said the health data of each citizen would soon be recorded electronically and health cards would be issued.

Each of the 676 mandals would have a primary health centre and a 104 mobile medical unit, he added.

The cancer care centre has a 110-bed facility, chemotherapy and radiology units, operation theatres and the latest linear accelerator.

This will be the first comprehensive cancer care centre in the state in the public sector while a similar facility will soon be developed in Kurnool city as well, according to the Chief Minister.

Over 70,000 people affected by floods in Andhra Pradesh