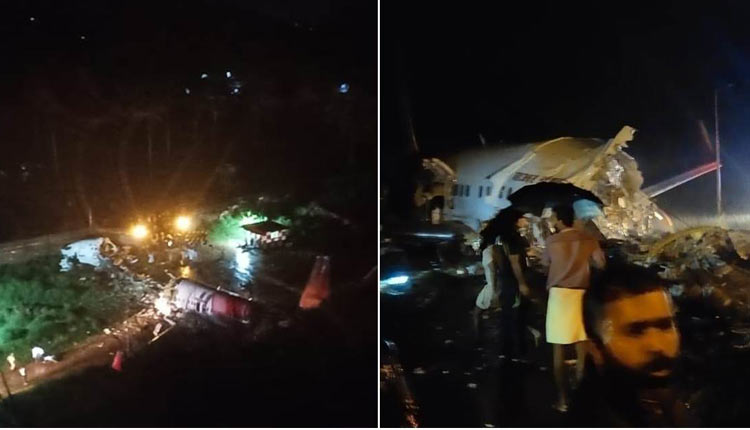 Kozhikode: At least 15 persons including the pilot onboard Air India Express aircraft were killed after the flight from Dubai skidded off runway at Calicut International airport in Kerala. The latest casualty number has been confirmed by Kerala DGP, Loknath Behera.

Earlier news agency ANI had confirmed the death toll to be 14 by quoting Malappuram SP. As per initial reports, the aircraft from Dubai to Calicut crashed after overshooting the runway and fell into a valley.

As per Ministry of Civil Aviation, there were 174 passengers, 10 infants, 2 pilots & 4 cabin crew onboard the aircraft when it skilled off the runway at Karipur Airport in Kozhikode, Kerala today evening.

The incident occurred at 7.41 p.m. on Friday, when the flight from Dubai to Kozhikode skidded off the runway after landing at the ‘table-top’ airport.

According to the Directorate General of Civil Aviation, the Air India Express landed on Runway 10 amid visibility of 2,000 metres in heavy rain, but continued running till the end of runway, fell down in the valley and broke into two pieces.

Soon after the incident, Prime Minister Narendra Modi spoke to Kerala CM over phone about Karipur plane crash and also expressed grief over the mishap.

Pained by the plane accident in Kozhikode. My thoughts are with those who lost their loved ones. May the injured recover at the earliest. Spoke to Kerala CM @vijayanpinarayi Ji regarding the situation. Authorities are at the spot, providing all assistance to the affected.

External Affairs Minister S. Jaishankar tweeted, “Deeply distressed to hear about the Air India Express tragedy at Kozhikode. Prayers are with the bereaved families and those injured. We are ascertaining further details.”

Kerala chief minister Pinarayi Vijayan said, “Have instructed Police and Fire Force to take urgent action in the wake of the plane crash at the Kozhikode International airport (CCJ) in Karipur. Have also directed the officials to make necessary arrangements for rescue and medical support.”

Meanwhile, an urgent meeting has been convened by the Civil Aviation Ministry at Rajiv Gandhi Bhawan in Delhi. According to reports, with DGCA Director-General & officials of the ministry, Airports Authority of India & Air India Express are present at the meeting.

DGCA has also ordered a probe into the mishap.

This is a developing story and will be updated as soon more information is received.