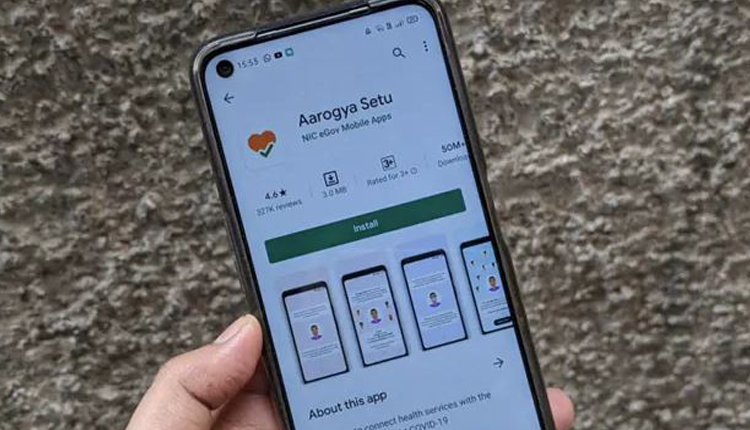 New Delhi: The Aarogya Setu app has been developed in the most transparent manner, the Ministry of Electronic and Information Technology said on Wednesday after the Central Information Commission issued a notice to the government over who created the app.

It added, “As was announced through Press Releases and Social Media posts on 2nd April 2020, Aarogya Setu App was launched by Government of India in public private partnership mode to bring people of India together in its fight against COVID-19.”

“The Aarogya Setu App was developed in a record time of around 21 days, to respond to the exigencies of the Pandemic with Lockdown restrictions only for the objective of building a Made in India Contact Tracing App with the best of Indian minds from Industry, Academia and Government, working round the clock to build a robust, scalable and secure App.”

The Ministry said that the app has been developed in a collaborative effort by the government and the private sector and has been downloaded by more than 16.23 crore users and has greatly augmented the efforts of frontline health workers in the fight against COVID-19.

Notices have been issued to the Chief Public Information Officers, Ministry of Electronics, National Informatics Centre and National E-Governance Division seeking to know why a penalty should not be imposed on them for giving an evasive reply on RTI applications related to the app.

The development comes in a complaint filed by one Saurav Das, stating that the relevant authorities, i.e., NIC, National E-Governance Division (NeGD) and Ministry of Electronics and Information Technology (MeitY), had failed to furnish information about the process of the creation of the Aarogya Setu App and other information relating to its creation.

He submitted that the RTI was filed with the NIC, which stated that it “does not hold the information” relating to the App’s creation, which is very surprising since it is the App’s developer.

While Aarogya Setu’s website says it was developed by the National Informatics Centre and the Information Technology ministry, both have denied knowledge of who created the app in response to a RTI query.

The CIC has asked the NIC to explain that when in the Aarogya Setu website it is mentioned that the platform was designed, developed and hosted by it, then how is it that it does not have any information about the creation of the App.

The Commission directed the above-mentioned CPIOs to appear before the bench on November 24 at 1.15 p.m. to show cause as to why action should not be initiated against them under Section 20 of the RTI Act.