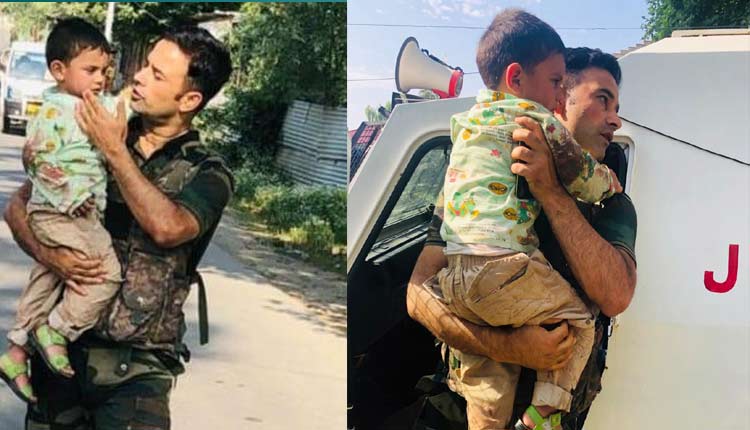 Srinagar: Days, after a five-year-old was killed in a terror attack in South Kashmir, on Wednesday in another shocking incident in North Kashmir’s Sopore a civilian, was killed right in front of his three-year-old grandson.

The heartbreaking pictures that surfaced showed the boy sitting on the dead body. He was later taken by the army and police personnel as they attended to him post the trauma.

One CRPF Head Constable was also killed while three security personnel were injured after terrorists struck a CRPF party in Sopore earlier in the day.

According to details, the CRPF party was fired by terrorists drawing an instant retaliation.

The injured CRPF personnel have been rushed to the army’s 92 base hospital in Srinagar.

The area has been cordoned off and an operation has been launched to nab the attackers.

This is the second attack on CRPF in Sopore in the last three months. On April 18, terrorists fired at a CRPF party killing three troopers.

A separate encounter started at Tral in South Kashmir on Tuesday night after inputs about the presence of a group of three terrorists. The gunfight stopped in the night itself but the search operation was still going on.

In a heartbreaking incident, an elderly person was killed by terrorists, when he was carrying his grandchild to buy milk. The confused wailing child was rescued by our security forces.

Will the apologists for #Kashmir terrorism, atleast now wake up? pic.twitter.com/pnrgCXsJZg