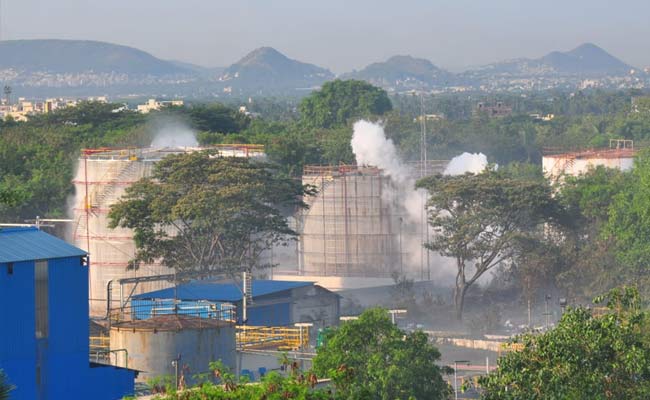 Visakhapatnam: Tragedy struck Andhra Pradesh early on Thursday as gas leaked from a chemical unit in the city, leaving one minor among 11 people dead, more than 70 left unconscious, with at least five sleeping hamlets affected unaware as most were still in bed.

Initial casualties included an 8-year-old girl. One man is reported to have died when he jumped into a well while another person fell off the balcony of his house as the gas leak at the LG Polymers unit located at RR Venkatapuram near Gopalapatnam spread across the five sleeepy villages around 2.30 a.m.

In scenes reminiscent of the Bhopal gas tragedy of 1984, the streets and hospitals of Visakhapatnam were filled with people in panic, scared to breathe and unable to fathom the silent tragedy that struck them.

According to Greater Visakhapatnam Municipal Corporation officials, the tragedy took place when the chemical unit, closed due to the lockdown, was being restarted on Thursday morning. The gas stored in tanks began leaking and spread in a radius of 3 km. Officials have zeroed in on two gases, styrene and pentine, as the likely causes for the accident.

Early morning sights included people lying unconscious on the streets and dead cattle by the roadside. People, with children strung over their shoulders, ran in panic towards hospitals. Ambulances rushed to the area and transported 70 unconscious people to the King George hospital.

A large number of those hospitalised are children.

Eyewitnesses said that the incident took place around 2.30 a.m. when people were fast asleep in their homes. All of a sudden people in surrounding areas woke up with a sense of breathlessness, terrible itching, and burning sensation in their eyes.

Panic-stricken they rushed out of their homes, only to collapse. Several cattle and livestock also succumbed to the poisonous gas pervading the air.

The impact of the tragedy was reduced to some extent as the plant operatives immediately alerted the authorities following which the district administration swung into action, an official said.

The surrounding areas within a radius of 3 kms have been cleared of people and arrangements made for feeding around 7,500 people who have been asked to vacate their homes.

Prime Minister Narendra Modi and Home Minister Amit Shah are keeping abreast of all details. Modi has started a meeting with NDMA officials to monitor the situation.

Spoke to officials of MHA and NDMA regarding the situation in Visakhapatnam, which is being monitored closely.

I pray for everyone’s safety and well-being in Visakhapatnam.

Andhra Pradesh Chief Minister Y.S. Jagan Mohan Reddy enquired about the gas leak incident in Visakhapatnam and directed the district officials to take every possible step to save lives and bring the situation under control.

Reddy announced Rs 1 crore ex-gratia each for the families of the 11 persons killed in gas leakage tragedy on the outskirts of this port city. Modi tweeted that he has spoken to officials in the ministry of home affairs. Union Minister of State for Home Affairs G. Kishan Reddy is also monitoring the situation.

The Chief Minister, who air-dashed to the city from Amaravati, also declared compensation for those admitted in hospitals after inhaling the toxic gas leaked from LG Polymers plant at RR Venkatapuram in the early hours of the day.

Officials said that the leak has been sealed and the gas dissipates fast and so the death toll may not increase substantially.

“Saddened by the news of gas leak in a plant near Visakhapatnam which has claimed several lives. My condolences to the families of the victims. I pray for the recovery of the injured and the safety of all,” tweeted President Ram Nath Kovind.

I am confident that the administration is doing everything possible to bring the situation under control at the earliest.

“Deeply distressed by the loss of lives due to gas leak … My condolences to bereaved families and wishes for speedy recovery of those taken ill,” he said in a tweet.

Deeply distressed by the loss of lives due to gas leak from chemical plant of a private company in Visakhapatnam, Andhra Pradesh. My condolences to bereaved families and wishes for speedy recovery of those taken ill.

LG Polymers, is among India’s leading manufacturer of polystyrene and expandable polystyrene. The plant located at Visakhapatnam, belongs to the Mumbai-based LG Polymers India, which is part of the South Korean group LG Chemical.

Originally set up in 1961, as Hindustan Polymers for manufacturing polystyrene and its co-polymers, the company was merged with McDowell & Co Ltd of UB Group in 1978. It ultimately became part of the South Korean group LG Chemical, in 1997.