Birsa Munda , an ace freedom fighter, had a larger than life persona

Munda preached strong anti-British feelings through his religion, encouraging thousands of tribal people to organise guerrilla armies to take on the Raj.

Today marks the birth anniversary of tribal leader Birsa Munda who belonged to Munda tribe of the Chhotanagpur plateau.  Apart from being an iconic revolutionary and freedom fighter, he was a religious leader and folk hero.

He is being remembered throughout the country for his exemplary sacrifices to the nation.  His action is widely seen as a potent symbol of resistance to British rule in India.  Last year, the Centre has announced to celebrate his birthday as Tribal Pride Day to honour and commemorate the contributions of Birsa Munda to freedom movement. On his birth anniversary, OTV takes you back to his early life and his contribution for the Mother India,

Birsa Munda was born on November 15, 1875 in Ulihatu, Bengal Presidency in the Khunti district of Jharkhand, and was named after that date in accordance with Munda tradition.

Munda spent his childhood surrounded by Christian missionaries, whose main mission was to convert as many tribal people as possible.

His teacher suggested to him to join in German Mission School, but Munda was forced to convert to Christianity in order to be accepted there. After the conversion, he was named Birsa David and then Birsa Daud. After a few years of studies, Birsa left the German Mission School.

Between 1886 and 1890, Birsa Munda spent a large amount of his time in Chaibasa, in present-day Jharkhand, which was close to the centre of Sardars. In the meantime, he started participating in anti-missionary and anti-establishment activities, and founded a movement known as ‘Ulgulan’, or ‘The Great Tumult’ as his understanding of the British atrocities developed.

Munda preached strong anti-British feelings through his religion, encouraging thousands of tribal people to organise guerrilla armies to take on the Raj.

On March 3, 1900, he was apprehended by British police and he died in Ranchi on June 9, 1900 at the age of 25.
Munda’s revolt inspired the tribes against the British rule. It also compelled officials to pass laws protecting tribal communities' land rights, like the Chhotanagpur Tenancy Act of 1908. 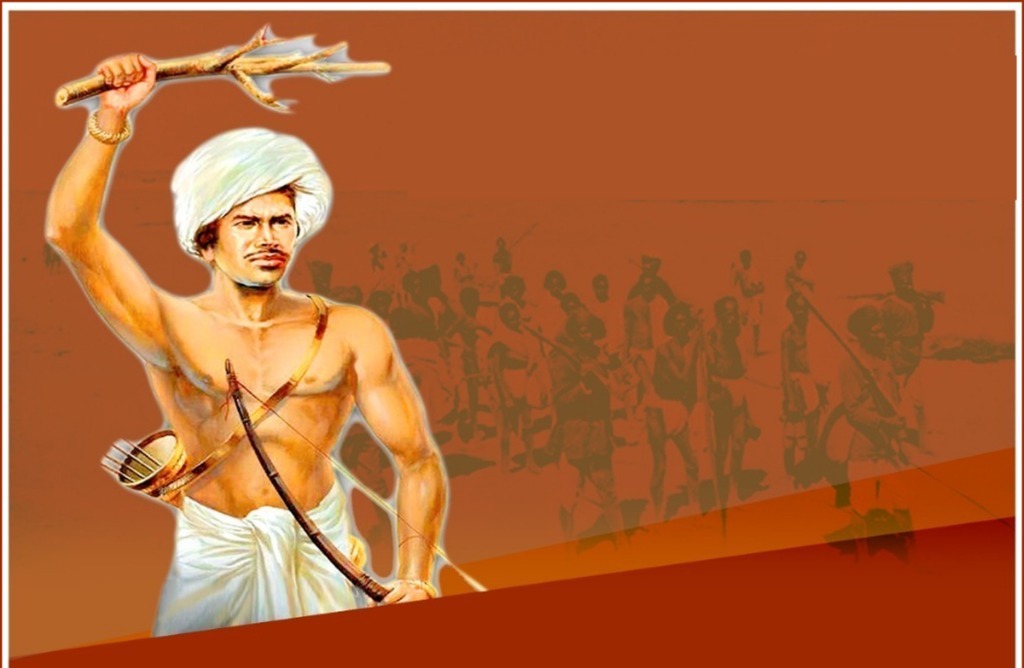 The life and legacy of the young tribal revolutionary are still commemorated today, notably in the tribal regions of Bihar, Jharkhand, and even parts of Karnataka and Odisha.

After garlanding the statue and paying floral tributes to Munda, the President interacted with family members of Bhagwan Birsa.

The President said tribal communities have enriched the life and culture of the nation with their art, craft and hard work. Bowing down to all tribal freedom fighters and unsung heroes, she highlighted as to how tribal communities made great contributions to the freedom struggle.

She also met Lugni Munda, a divyaang lady, and her son Dilip Munda whom President had adopted and funded his education.

Paying tribute to freedom fighter, Prime Minister Narendra Modi in a video message said, “15th November is a day to celebrate Adivasi tradition as Bhagwan Birsa Munda was not just a hero of freedom struggle, he was also a carrier of country's spiritual and cultural energy.

“The nation is moving with the energy of Panch Praan to realise the dreams of Bhagwan Birsa Munda and crores of Janjatiya Bravehearts. Expressing pride in the tribal heritage of the country through Janjatiya Gaurav Diwas and resolution for the development of the Adivasi community is part of that energy”, he said,

Union Minister Dharmendra Pradhan taking to twitter wrote, Today, we recall the contributions of the great tribal icon and India’s pride Bhagwan Birsa Munda. A symbol of patriotism and progressiveness, Birsa Munda ji will forever remain one of our greatest inspirations.

“I encourage all, especially my young friends in schools and colleges to read more about Bhagwan Birsa Munda and the contributions of our tribal heroes in India’s freedom struggle. #JanJatiyaGauravDivas2022”, his tweet read.