BJP national president JP Nadda arrived in Bhubaneswar on a two-day visit to the State today. After his arrival at Bhubaneswar airport, he was taken to the State party office in a huge procession. He will address a mass gathering at Janata Maidan today where around 20,000 booth-level party workers have reportedly assembled. After the address, he will return to the party office where he will discuss party affairs with MLAs, MPs and other leaders.

BJP chief JP Nadda called for BJD-mukt Odisha while addressing a gathering at Sanyukta Morcha Sammelan in Bhubaneswar on Friday. "To see a developed nation, we need to develop every state. For the development of Odisha, the state has to get rid of BJD," said Nadda.

BJP national president JP Nadda visited Puri Srimandir on Friday to seek blessings of Mahaprabhu Jagannath. He is accompanied by other senior leaders of the party.

BJP national president JP Nadda visits Puri Srimandir to seek blessings of Mahaprabhu Jagannath; he is accompanied by other senior leaders of the party #Odisha pic.twitter.com/8XfKNm5DSi

Bharatiya Janata Party National President, JP Nadda arrived at Puri on Thursday night following his meetings at Bhubaneswar. He received an overwhelming welcome at the pilgrim town by party leaders and supporters at Atharnala.

Nadda is scheduled to avail darshan of Lord Jagannath in Srimandir on Friday.

Odisha govt is completely immersed in corruption. Time has come to uproot this govt. 50 lakh people in Odisha are deprived of Ayushman Bharat Yojana. Fake bills are being made here for MGNREGA. Odisha also needs double-engine govt. Even Ratna Bhandar of Lord Jagannath is not safe in Odisha. Ratna Bhandar's key was missing and later a duplicate key was found. Uproot this type of 'duplicate' govt and bring BJP to power in Odisha, said BJP chief JP Nadda while addressing a gathering in Bhubaneswar.

We are the party with a strength of 18 crore. There is no party in the world with such a strength... For us, it is always nation first, but keeping in mind the regional aspirations: We have 302 MPs in Lok Sabha, 92 in Rajya Sabha, 1394 MLAs, around 120 Mayors... This is the strength of our party. So, we can say BJP is a cadre-based party but at the same time, it is a mass-based party with a mass following, said BJP president JP Nadda.

Congress is a party of brother and sister

Today, we are fighting with Indian national Congress, but the party no longer remains a national or Indian as it has become a party of brother and sister. We are now fighting with the family-based parties, said BJP chief JP Nadda at Karyakarta Sammelan in Bhubaneswar on Thursday.

BJP works from ground floor, not from any 2nd or 3rd floor: BJP VP Jay Panda

BJP national vice-president Baijayant Jay Panda thanked the people of Odisha for making BJP the No 2 party in the State and said, "Very soon, BJP will come out as the No 1 party in #Odisha. He said while other parties do family politics and work for their own interests, BJP is the only party that works in the interest of the country.

Taking a dig at the ruling BJD government in Odisha, Panda said the BJP works from the ground floor and not from any 2nd floor or 3rd floor. JP Nadda on way to party office in Bhubaneswar

After his arrival at Bhubaneswar Airport, the BJP national president was taken to the State party office in a huge procession. BJP national president JP Nadda arrived at Bhubaneswar Airport today on a two-day Odisha visit. He received a rousing welcome on his arrival at the Biju Patnaik International Airport. 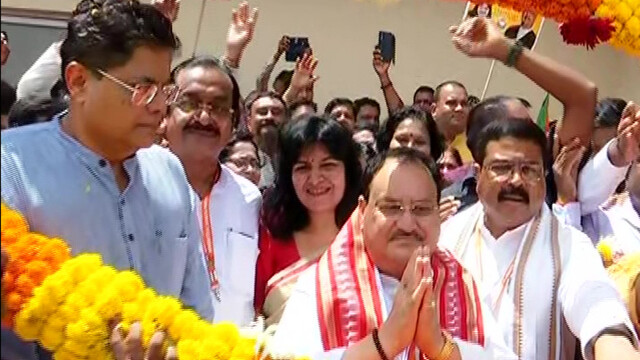 BJP chief JP Nadda likely to arrive at Bhubaneswar Airport by 11:50 am

BJP national president JP Nadda is expected to arrive at Bhubaneswar Airport by 11:50 am. Nadda is likely to blow the 2024 election bugle in Odisha during his two-day visit to the State.

A total of 25 platoons of police force have been deployed in Bhubaneswar to avoid any eventuality during the BJP national president’s visit. Special parking lots have reportedly been identified for hassle-free traffic movement.

JP Nadda’s two-day Odisha visit comes at a time when the party members have just undergone a three-day training workshop. Nadda is likely to instill confidence in the party cadres and leaders of Odisha ahead of the 2024 general elections.