Devotees have thronged the holy town of Puri for the Bahuda Yatra of Lord Jagannath today. As per the tradition, all the rituals began much earlier inside the Gundicha temple. The 'Pahandi' rituals, which were scheduled to start from 12 noon, also started much earlier. After Lord Sudarshan, the Pahandi rituals of Lord Balabhadra were conducted by the servitors.

During the ceremonial Pahandi rituals, all the deities- Lord Jagannath, Balabhadra and Devi Subhadra were escorted to their respective chariots.

After witnessing a grand spectacle on the occasion of Srigundicha, devotees are all charged up to pull the three chariots of the deities back to their abode Srimandir, after a nine-day sojourn of the Trinity at Gundicha temple.

The return journey is called Bahuda Yatra. ‘Bahuda’ in Odia means 'return'. A thick blanket of security cover has been spread over Puri to ensure smooth conduct of the Bahuda Yatra.

The most eye-catching ritual of Rath Yatra, the Laxmi Narayan Bheta was held amid fanfare on the Puri Bada Danda soon after arrival of Lord Jagannath on his Nandighosa chariot near Srimandir. As per tradition, the Bheta is a meeting between the Lord who returns to his abode after spending 9 days at Gundicha Temple and Devi Laxmi who is angry at the Lord for leaving her behind alone in the Srimandir during the yatra.

The chariots of Lord Balabhadra and Devi Subhadra reached near Puri Srimandir amid the presence of lakhs of devotees on the Bada Danda. The chariots arrived at the destination on Saturday hours ahead of the schedule. The Holy Trinity's homecoming comes after nine-day sojourn to Gundicha Temple.

The world struck in awe as Lord Jagannath began his return journey to Puri Srimandir from Gundicha temple on the auspicious occasion of Bahuda Yatra today.

All the rituals associated with Bahuda Yatra including the ceremonial pahandi were completed much before than its schedule. A thick blanket of security was also in place for the smooth conduct of the Bahuda Yatra. Pulling of Darpadalana, the chariot of Devi Subhadra begins

After the chariot of Lord Balabhadra, devotees pulled Darpadalana, the chariot of Goddess Subhadra after the completion of the pahandi, chhera pahanra and other associated rituals in Puri on the occasion of Bahuda Yatra today.

Chariot pulling has begun in Puri as Lord Balabhadra seated on his gigantic Taladhwaja embarks on the return journey to Puri Srimandir. Watch Lord Jagannath being taken to chariot in Pahandi

Pahandi rituals of the Holy Trinity concluded with Goddess Subhadra, Lord Balabhadra and Mahaprabhu Jagannath being escorted to their respective chariots for their return to the abode after 9-day-long stay at Gundicha Temple.

Lord Balabhadra, the eldest of the Holy Trinity, stepped out of Gundicha temple in ceremonial 'Dhadi Pahandi' for the return journey to Srimandir today.

Much ahead of schedule, as shared by the Srimandir administration, 'Pahandi' ritual of Lord Sudarshan begins. 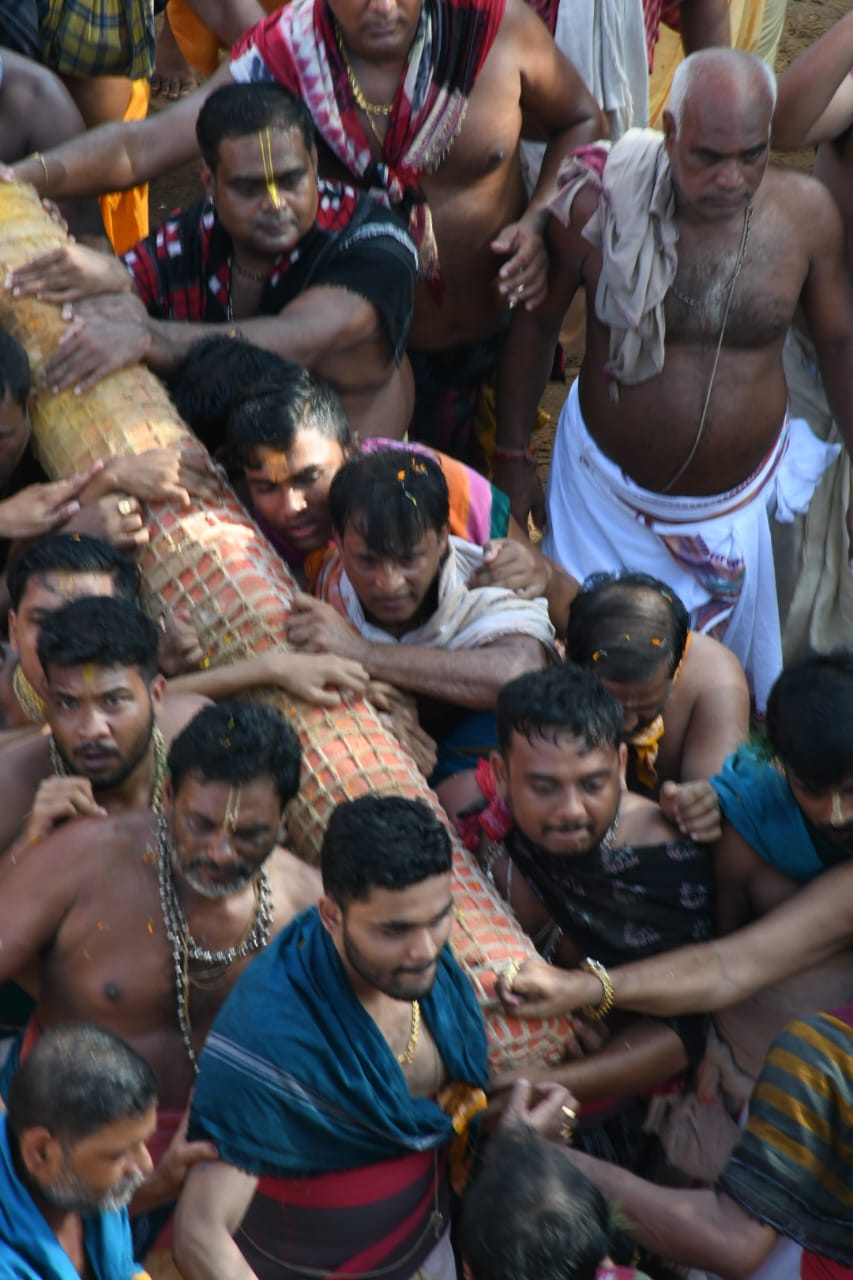 After giving darshan to millions of devotees from the Adapa Mandap, Lord Jagannath and his sibling deities- Lord Balabhadra and Devi Subhadra are all set to return towards their abode, Puri Jagannath temple today. Read more.....

Timing of Bahuda Yatra rituals in Puri today - Pahandi to start at 12 pm and end by 2.30 pm. As per the schedule, Chhera Pahanra will begin at 2.30 pm while the Pulling of chariots will commence from 4 pm. Bahuda Yatra- The return of the Holy Trinity to Srimandir

After a nine-day-long sojourn at Gundicha Temple in Puri, the Holy Trinity, Lord Balabhadra, Devi Subhadra and Mahaprabhu Jagannath, will return to their abode Srimandir today.