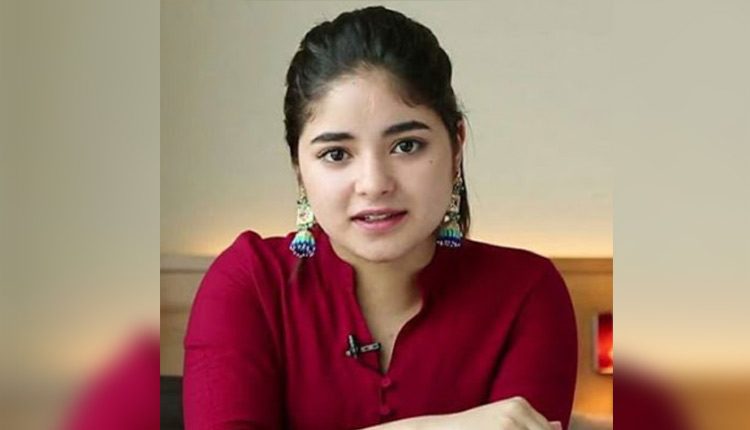 Mumbai: Former actor Zaira Wasim’s post about floods and locust attacks was met with a huge backlash, forcing her to deactivate Twitter and Instagram accounts, but the “Dangal” star has now made a comeback on social media.

Zaira Wasim had caused a social media storm after she tweeted a verse from the Quran that many people said justifies the locust attacks in various states across the country.

“So We sent upon them the flood and locusts and lice and frogs and blood: Signs openly self-explained: but they were steeped in arrogance- a people given to sin -Qur’an 7:133 (sic),” Zaira had said in a now-deleted post.

The same post is, however, still visible on her Instagram page, where she had also shared a video.

Zaira was criticised by social media users for her insensitivity towards those affected by the locust attacks, which led her to deactivate both her Twitter and Instagram accounts.

But on Saturday, she resumed her accounts and in a post, explained why she had exited the social media platforms.

“Because I am just a human, like everyone else, who’s allowed to take a break from everything whenever the noise inside my head or around me reaches its peak,” Zaira, 19, said in response to a query by one of the users.

Last year, the National Award-winning actor was in a centre of a debate after she announced her “disassociation” from acting, saying she was not happy with the line of work as it interfered with her faith and religion.

She had said that it felt like she had struggled to become someone else for a very long time.

The actor, who was in her early teens when she appeared in Dangal opposite Aamir Khan, also worked in his 2017 production venture Secret Superstar. Her last film was “The Sky Is Pink”, opposite Priyanka Chopra and Farhan Akhtar.