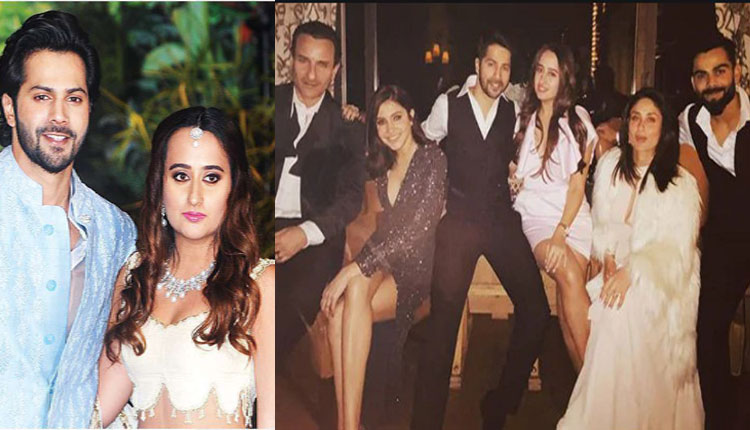 The countdown to the first big B-town wedding of 2021 has begun as Bollywood heartthrob Varun Dhawan is all set to tie the knot this weekend with longtime girlfriend Natasha Dalal. The longtime couple is reportedly getting married in a big fat Punjabi wedding in Alibaug. On Saturday, as per the latest development, the actor arrived at the venue for his Sangeet ceremony.

The man of the hour, Dulha Varun recently arrived in a white T-shirt and blue jeans along with a mask and made his way into the venue, briefly stopping to pose for the press cameras. His parents David and Karuna Dhawan, and brother Rohit Dhawan with wife and daughter, were snapped by paparazzi in Alibaug, kicking off wedding festivities.

Apart from Varun and Natasha and their family members, filmmaker Shashank Khaitan, filmmaker Kunal Kohli with family, Varun’s niece Anjini Dhawan, and fashion designer Manish Malhotra have also arrived at the venue. Many other celebrities are expected to be part of the wedding festivities during the weekend.

There is a strict No Phone Policy in place for all the wedding functions. As per reports, household and home staff’s phones will be sealed while on-premises. It’s a strict order from the bride-to-be, Natasha, since she doesn’t want their pictures to be leaked on social media.

The Dhawan’s have blocked an entire resort facing the beach in Alibaug and are planning a grand yet restricted wedding ceremony. The wedding functions will extend over three days, on January 22, 23, and 24, with guests following the bio bubble protocol. The guests’ list includes immediate family members of the couple along with close friends and colleagues.

Varun Dhawan and Natasha Dalal, childhood sweethearts, had reportedly planned to get married last year but were forced to postpone their wedding because of the Covid-19 pandemic and lockdown.