Amidst the rising pandemic cases in the country, many celebrities are spotted leaving for vacations which has invited a lot of backlash from fans. Recently, Varun Dhawan was also caught…

Amidst the rising pandemic cases in the country, many celebrities are spotted leaving for vacations which has invited a lot of backlash from fans. Recently, Varun Dhawan was also caught up in the receiving end of the backlash. From netizens pointing out his ‘insensitive’ post to trolling him for ‘vacationing’ amidst a pandemic, Varun decided to break his silence and clarify his stand.

On Wednesday, Varun Dhawan was spotted by the paps as he landed in Mumbai after wrapping the scheduled shoot of Bhediya in Ziro, Arunachal Pradesh. While leaving the airport with his wife, Natasha Dalal, VD was seen schooling the paps to maintain social distancing and also refused his fans for selfie requests. Netizens soon commented on the videos about how can he school people after he is on a vacation, some confused him for returning from the Maldives, which is the celebrity hot spot now leading to an escalated backlash.

Soon Varun started hitting back at a number of comments himself and clarified that he was coming back from the shoot wrap of his film. One user had written, “You went out for vacay and gave paps the chance to snap, now you come back and complain. Stop over showing your privilege when people in your country are dying.”  VD clapped back saying, “well your assumption is wrong I was shooting my film and not on holiday and what do u mean gave them a chance. How do u not give them a chance I have people who have also lost their life in covid so please keep ur assumptions to urself.” 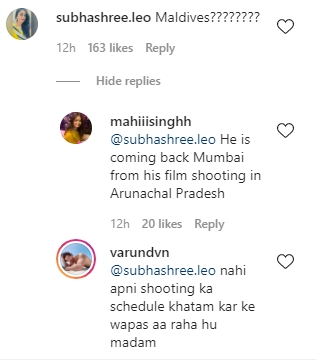 On the same itself, Varun Dhawan had posted a common dp made by his fans for his birthday which is inching closer. With pictures of all his previous roles, the poster had a message ‘Donate Plasma, Save Lives’. Fans pointed out the poster seemed tone-deaf to the current health crisis and not in good taste. After drawing flak, he deleted the post and reflected that this is not the way to use the social platform in the current scenario.

Well it was to make someone happy who made the graphic and requested it but I guess this medium Shouldn’t be used for that right now. https://t.co/STQ4DIAcZU

Varun Dhawan schedule wrapped his upcoming horror drama opposite Kriti Sanon in the Covid free city of Ziro in Arunachal Pradesh this week. His beau Natasha Dalal had accompanied him to the shoot.