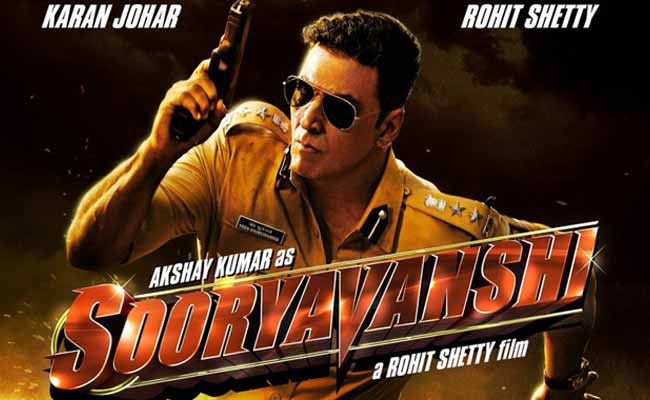 Mumbai: Rohit Shetty’s latest cop drama “Sooryavanshi” has a new release date. It will now hit the theatres on March 24, it was announced through a quirky video featuring the films hero Akshay Kumar along with Ajay Devgn and Ranveer Singh, the two other onscreen uniformed heroes of Shetty’s supercop universe.

The date marks the Maharashtrian New Year Gudi Padwa and therefore is a state holiday in the state. Keeping the festive mood in mind, Shetty and team want to cash in on the Maharashtra government’s declaration that multiplexes, eateries and shops in malls can stay open 24×7 from now on, following an initiative by the Cabinet Minister of Tourism and Environment Government of Maharashtra, Aditya Thackeray.

This will let “Sooryavanshi” be screened all night on March 24.

In the video, a group of children with a piece of paper mentioning the new release date, goes to Ranveer, or Sangram Bhalerao in “Simmba”, for approval, and he asks them to go and ask Ajay, or Bajirao Singham of the “Singham” films.

Ajay happily agrees, as does Akshay Kumar, who plays the starring role of Veer Sooryavanshi in “Sooryavanshi”. Then, all the kids run towards the theatre and shout: “Aa rahi hai police (the police will be here)!”

“Sooryavanshi” marks the onscreen reunion of Akshay with Katrina Kaif after a decade. The two stars last starred together in the 2010 release, “Tees Maar Khan”.

“Sooryavanshi” is presented by Reliance Entertainment, and produced by Rohit Shetty, Karan Johar and Cape of Good Films.