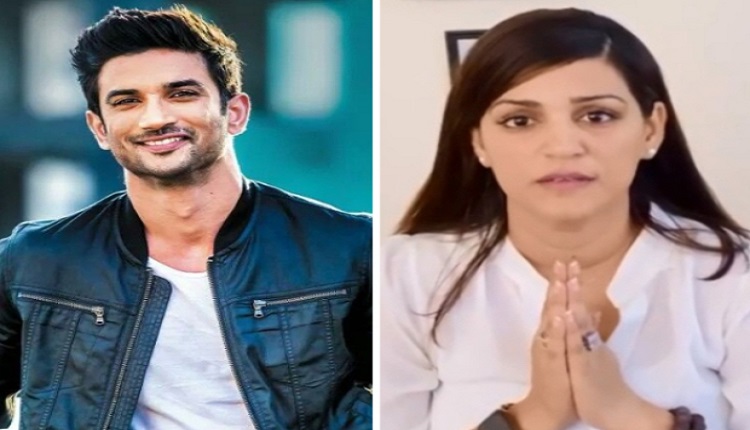 Mumbai: Shweta Singh Kirti, sister of Bollywood actor Sushant Singh Rajput, has urged everyone to make Justice For Sushant a movement of the people.

Shweta took to Instagram, where she shared a posted a picture where half of Sushant’s face is photoshopped onto half the face of Lord Shiv.

She captioned the image: “Put up Billboards and flyers in front of your home, on your car. Split into groups and have peaceful car rallies and tag me. Let’s make it into People’s Movement! We will not stop till the justice is served! Let the power of God be with us!”

Put up Billboards and flyers in front of your home, on your car. Split into groups and have peaceful car rallies and tag me. Let’s make it into People’s Movement! We will not stop till the justice is served! #UnitedForSSRJustice #Billboards4SSR #SatyagrahForSSR #GlobalPrayers4SSR pic.twitter.com/Txy3NUvcgs

Sushant was found dead in his Bandra flat on June 14. The Central Bureau of Investigation (CBI) is probing the death.

Hours after the Mumbai Police registered an FIR on the complaint filed by Rhea Chakraborty against Sushant Singh Rajput’s sisters and others, senior advocate Vikas Singh representing the late actor’s family launched a scathing attack on the city police force.

Speaking to media here, Singh said, “Today an FIR has been registers by the Mumbai Police. The Bandra Police station is like her second home. The FIR registered by the Bandra Police is a clear violation of the Supreme Court order.” The Supreme Court last month closed all options for the Mumbai Police to continue the probe or register a criminal case in future in connection with the unnatural death of SSR.

“The right of registering the FIR with the Mumbai Police in this case was only for the 147 proceedings of the Mumbai Police which were already on. What Rhea is trying to say through this FIR should have been given by her to the CBI as a statement,” he added.

The Mumbai police on Tuesday registered the FIR against Sushant Singh Rajput’s sisters Priyanka Singh and Meetu Singh, and a doctor from Ram Manohar Lohia hospital in Delhi based on a complaint filed by actor Rhea Chakraborty.

A case has been filed at Bandra police station under sections pertaining to cheating, forgery, abetment to suicide, criminal conspiracy and other sections of the Narcotic Drugs and Psychotropic Substances Act.

The senior advocate said that the Mumbai Police has filled up the NDPS section as if they wanted to make her happy. “This FIR is a clear violation of the Supreme Court proceedings. Moreover, there is another judgment which says that whenever an FIR is being registered agaisnt a Doctor, a medical team shall be constituted and only after that such a step can be taken,” Singh said.

He added that if the complaint was bonafide and genuine, their statement to CBI would have been a big enough blow to the family of the late actor.

Earlier on Monday night, Singh had intimidated that if the Mumbai Police takes this complaint forward, he would “initiate a request for Contempt of court proceedings”.

“Mumbai Police shall not accept any such complaint as it would be a clear violation of the Supreme Court’s order. The order clearly prohibits any other agency apart from CBI from registering any new complaint in this case,” said Singh while holding a press conference here.

“This is a clear attempt to deflect the mind of the people and derail the probe. If the Bandra Police wil take this complaint forward, we will initiate contempt proceedings,” he added.

Ordering a CBI probe into the matter, Justice Hrishikesh Roy in the apex court had said, “While according approval for the ongoing CBI investigation, if any other case is registered on the death of actor Sushant Singh Rajput and the surrounding circumstances of his unnatural death, the CBI is directed to investigate the new case as well.”

The top court had also noted that in the present case, the Mumbai Police has attempted to stretch the purview of Section 174 without drawing up any FIR and therefore, as it appears, no investigation pursuant to commission of a cognizable offence is being carried out by the Mumbai Police.