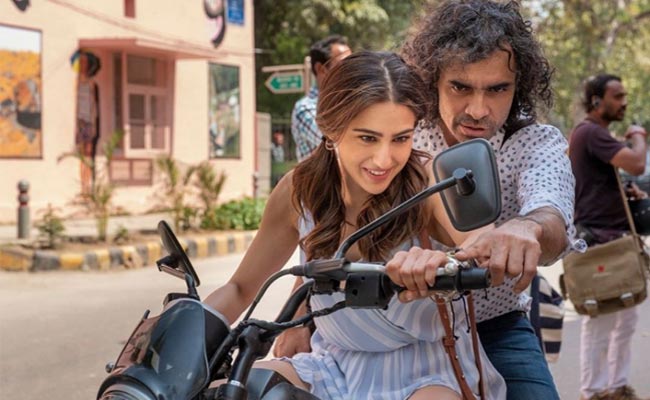 The trio of Sara Ali Khan, Kartik Aaryan and Imtiaz Ali had a lot of fun filming their upcoming movie “Love Aaj Kal 2” and it is quite evident from their interviews and BTS pictures and videos. Recently, Sara shared a picture in which she is trying her hands at driving a bike and her director Imtiaz Ali is behind her teaching her the basics.

Interestingly, the actress has tried to be poetic in her post with each end-word rhyming with the other. In her post alongside her picture with Imtiaz Ali, the “Kedarnath” actress writes, “Sometimes error outweighs trial! Especially when you can get severely ghayal‼️You’d rather run ? km than trust me for a mile ?♀️? Chhodo bike, scooter, gaadi- I only like ghungroo and Payal”

Well! Sara certainly has managed to make the post very interesting with her words and is getting a good response from her followers.

Sometimes error outweighs trial! ??‍♀️??‍♀️??‍♀️ Especially when you can get severely ghayal‼️❌? You’d rather run ? km than trust me for a mile ?‍♀️? Chhodo bike, scooter, gaadi- I only like ghungroo and Payal ? ? #sarakishayari #releasekitayari 3️⃣days to go!!!

Sara and Kartik are fondly called Sartik and their chemistry will be on the test when “Love Aaj Kal 2” will release on Valentine’s Day. As a part of the promotion, the rumoured couple has appeared on almost every reality show on television, web talk shows and radio programs. From going to Ahmedabad and visiting colleges to attending events and posing for the paparazzi, Kartik and Sara are doing everything possible to ensure that their promotion reaches all their fans.

While Kartik is enjoying a good time in the film industry with back to back two hits in the form of “Sweety Ke Titu Ki Shaadi” and “ Pati Patni Aur Woh” Sara is yet to establish herself in the reckoning of popular leading ladies of B-town. She was last seen in “Simmba” opposite Ranveer Singh after debuting with Sushant Singh Rajput in “Kedarnath.”

There have been a lot of rumours about Sara and Kartik’s affair and breakup but whether their onscreen chemistry is as interesting as it looks in real life will be clear only after the movie releases on 14th February.