Rhea Chakraborty’s T-shirt Out Of Stock: A Strong Message or A Fleeting Fashion Trend? 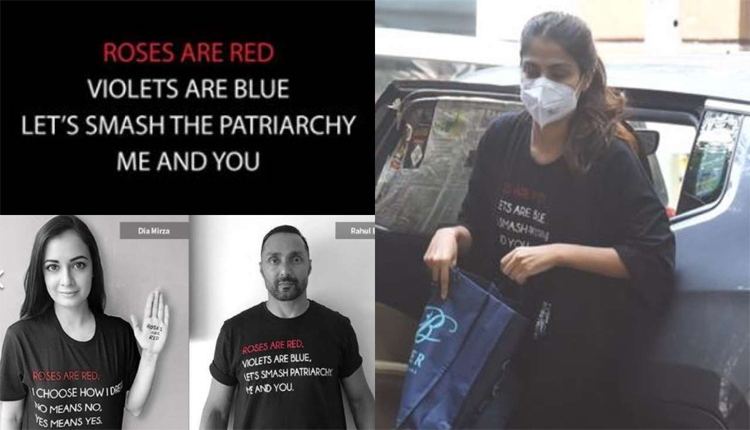 Bollywood actress Rhea Chakraborty made headlines when she arrived to her NCB hearing for more than one  reason: Her alleged links with the Bollywood-drug cartel that came to the fore during the investigation into late actor Sushant Singh Rajput’s death case and her T-Shirt.

While television news channels were busy reporting every minute of Rhea’s  arrest by the Narcotics Control Bureau, social media was fixed on her T-shirt which gave the proverbial ‘roses are red’  a new twist.

Her T-Shirt, which read “Roses are red, violets are blue, Let’s smash patriarchy, Me and you”, seemed to grab eyeballs on social media.

Later in the day, following the news of Rhea’s arrest, her T-shirt quote was posted by several Bollywood actors including Kareena Kapoor Khan, Farhan Akhtar, Vidya Balan, Dia Mirza, Sonam Kapoor and Tapsee Pannu among others, on their respective social media handles in support of the Jalebi actor.

As per reports, the biggest beneficiary of this viral promotion however has been the Mumbai based company that sells this quoted black T- shirt. The company is cashing on the ‘smash the patriarchy’ wave, reports say. At present, the T-shirt is out of stock and with the massive demand, it is only available on pre order basis.

So has the ‘message’ by Rhea resonated with the public or is it just another fleeting fashion trend? That’s uncertain as of now, just like the outcome of Sushant’s death case probe.