Rana Daggubati recently unveiled the teaser of his upcoming talk show for YouTube channel South Bay. The teaser shows the animated version of Rana saying, "Mein Rana Daggubati. Duniya ke sabse irrelevant show mein aapka swagat hai. It's called 'Why Are You (YRU?" See the people dash in isolation." Rana promotes the show as one where the most irrelevant questions will be asked followed by the most irrelevant answers.

According to reports, the Ramaiya Vastavaiya actress will host a talk show Secret Box. Through this show, she will discuss with personalities across the world life after the pandemic. Lakshmi Manchu will host yet another talk show for Rana Daggubati's South Bay titled Coming Back to Life.

The Telugu superstar also unveiled a teaser introducing Vijay Varma as Billa. He captioned the post, "Here is BILLA 🔥🔥🔥 @itsvijayvarma @southbay.live #yru #WHYAREYOU??" Vijay Varma reacted, "But why are you?" 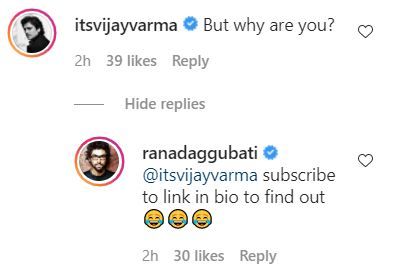 The animated video opens with a South Indian song playing in the background. Slowly an animated cat with a hoodie comes closer to the screen. It says, "Hum Hai Billa." The voiceover is that of Vijay Varma. The clip is more interesting because in the backdrop viewers can see a still from the epic Baahubali movie.

Rana Daggubati is all set to launch his YouTube channel South Bay on 15 November during Diwali this year. The Baahubali actor believes that this is the perfect time for creating good content on digital media. He wants to experiment and come up with some quirky, creative, and interesting content for his viewers.

The platform will showcase videos from 10 seconds to 10 hours in multiple languages. After Vijay Varma, fans are now waiting for Rana Daggubati to unveil more characters from his South Bay platform.