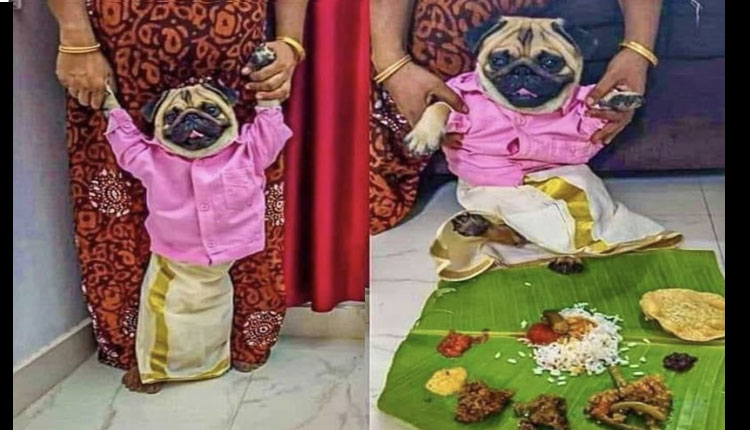 In this pandemic, while a lot of us tried to find love online, seems like our four-legged friends were also not far behind. Recently, a post of a dog owner asking for ‘Rishtas’ with his pug dressed up in traditional Mundu took over the internet is winning hearts. ‘

A pet owner from Kerela shared pictures of his pug wearing a traditional Kasavu Mundu and a pink shirt. He was seen standing in one picture and in another he is seen sitting in front of a variety of traditional Keralite dishes served on a banana leaf. The caption read, “If anyone’s looking for a handsome Malayali boy to get your beautiful daughter married off to… ;),”

The images became viral when a Twitter user shared the post. She wrote “Tbh (to be honest) the only reason I’m still on Facebook is for Indian dog parents groups! So EXTRA. Never disappoints,”

As soon as the tweet became viral, a number of Rishtas from fellow canines owners flooded in for the adorable pooch from different parts of the country.

My girl is here, she’s from #Kashmir pic.twitter.com/BOFT9aGlbP

Indian parents generally go overboard with their furry kids. From dog weddings to bizarre rituals, canines are made part of the Indian functions just as we are.