Reactions to this post poured in from friends and fellow cricketers. But it was the reaction of Hardik Pandya that almost confirmed that KL Rahul and Athiya are a couple. The middle-order Indian batsman commented, "My Lovelies" followed by a black heart.

After wishing his rumored ladylove with their cozy picture, KL Rahul also created a naughty story. He shared two pictures of Athiya of which one is from her childhood days. KL captioned the post with younger Athiya, "Where's the cake."

The second post shows the adult Athiya Shetty holding a cake, very much eager to ravish it. KL Rahul captioned this post, "I think she is happy."

KL Rahul and Athiya Shetty triggered relationship rumors last year when on Athiya's birthday the Punjab Kings XI IPL 2020 team's captain shared a cute picture with the Hero actress. The picture grabbed eyeballs as headlines screamed that it was Rahul's way of making his relationship with Athiya official. 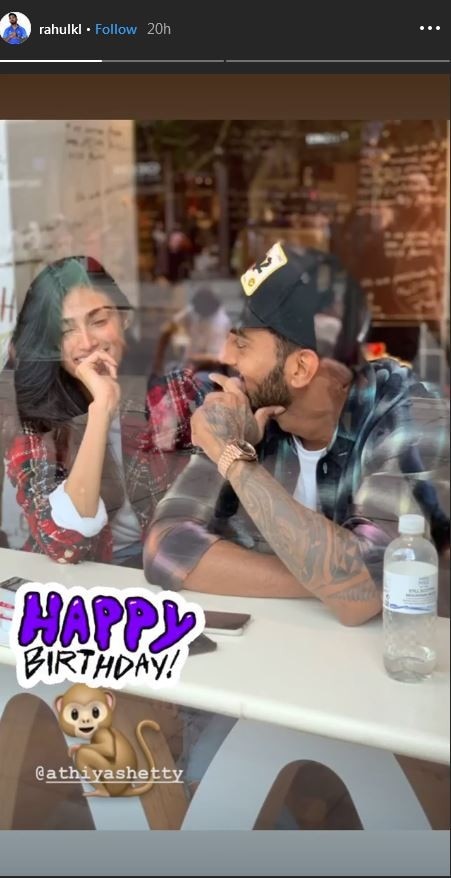 Earlier they were spotted stepping out for dinner together. The two even went on vacations abroad with a group of friends.

While there have been a few posts in between, both KL Rahul and Athiya have been keeping a low profile about their relationship during the lockdown.

According to reports, the rumored lovebirds met for the first time through a common friend. Since their first meeting, the two hit it off really well and eventually started dating. The two have been making public appearances but are tight-lipped about their relationship.

However, the birthday post of KL Rahul for his rumored girlfriend once again confirms that they are in a relationship.

Also Read: Most of the ex-wicket keepers believe that the immensely talented KL Rahul is the likely first choice in white-ball cricket after Mahendra Singh Dhoni's international retirement.