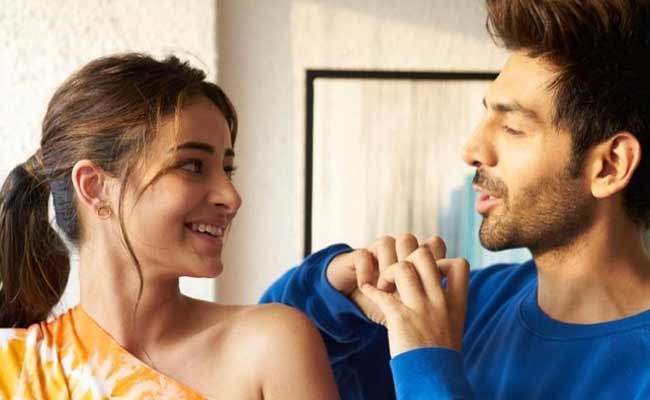 Kartik Aaryan is the heartthrob of the nation. Although his last movie with Sara Ali Khan “Love Aaj Kal 2” did not click at the box-office, the popularity of this chocolate boy has not diminished a bit. Just a few days ago the video by the “Dostana 2” actor on COVID19 addressing Indians on how their wrong behaviour can affect the entire nation became a big hit crossing millions of views.

#CoronaStopKaroNa
My Appeal in my Style
Social Distancing is the only solution, yet ??@narendramodi we are with you Sir !! pic.twitter.com/qhQBZSdFAd

He is the star of the young generation and so is Ananya Panday with whom he worked in the movie “Pati Patni Aur Woh” that released last year. All through the making of the movie and also during the promotion the rumours about Kartik Aaryan and Ananya Panday’s affair kept on making rounds. The sultry daughter of Chunky Panday even admitted during one interview that she had a crush on her co-star Kartik.

Before the rumours about Kartik with Ananya went around his name was linked with Sara Ali Khan for obvious reasons. From ringing Sara’s birthday in Bangkok to calling her princess, Kartik was showing all the signs of a man in love. Both the stars were exuding couple vibes and the media people simply could not stop writing about them. However, when Sara and Kartik requested the media not to photograph them together, it was a clear indication that the two are heading towards a breakup.

At that time Kartik was busy shooting for “Pati Patni Aur Woh” with Ananya and Bhumi Pednekar. The cute banter between Kartik and Ananya was loved by all and both the stars kept on sharing their latest Gupshup on social media which triggered their romance rumours. Even during the promotion, Kartik and Ananya’s chemistry was sizzling and suggested some real connection between the two. But all these affair rumours died suddenly when Kartik and Sara Ali Khan started promoting their movie “Love Aaj Kal 2.”

Many believed that Kartik has moved on and maybe rekindling his romance with Sara. However, after the release of his movie on 14th February, Kartik and Sara were also not seen together. So now the fans believe that all the display during promotion was to ensure that the movie is successful.

Ananya Is Constant In Kartik’s Life?

One of the Instagram stories of Kartik, however, has set the tongues wagging once again. When some time ago Kartik shared a post on Instagram it showed a young girl’s hand with a pink-coloured band. Later on, Ananya Panday was spotted wearing the same pink band exactly on the same hand in a picture.

Pic 1:A mysterious hand with a pink band was there in #KartikAaryan 's latest video in his instagram story.
Yesterday Kartik Aaryan was seen enjoying a game of jenga with his father, mother & sister at home.
Pic 2, 3: #AnanyaPanday was spotted wearing a pink band several times☺️ pic.twitter.com/yoEdEqTft1

Many believe that the girl in Kartik’s post was none other than Ananya and that he is having an affair with the “Khaali Peeli” actress. Speculations suggest that both the stars are keeping it low profile to ensure that it does not affect their career and people talk more about their movies rather than their affair.