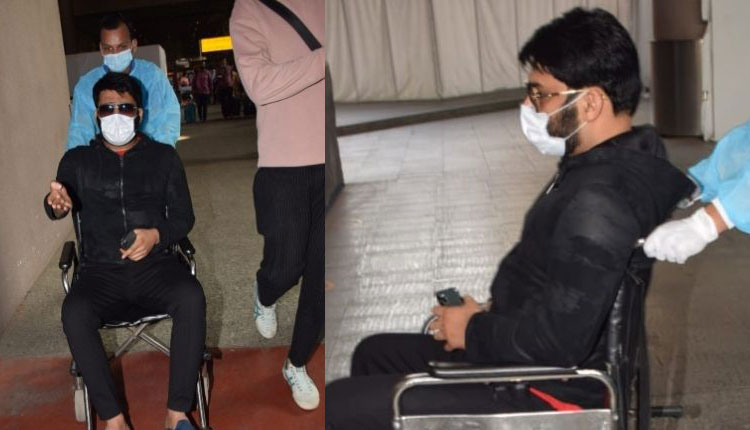 Kapil Sharma was recently spotted at the Mumbai airport but the pictures of him left fans shocked as he was seen sitting in a wheelchair. While it is still not known why Kapil was wheelchair-bound, his fans are concerned and curious to know if all is well with the comic star.

While he was spotted at the airport, Kapil didn’t seem to be in a good mood and snapped at the paparazzi when they were trying to click him. As he was moving towards the parking lot in a wheelchair, the shutterbugs continued to follow him to which he lost his cool.

Sharma is then seen in the video scolding the paps, he says “Oye, hato peeche saare tumlog. Tumlog badtameeziyaan karte ho” When one of Kapil’s managers asked the paps to delete the video, they denied doing so.

After the videos and pictures of Kapil in a wheelchair surfaced on the internet, fans have been flooding the comment sections with get-well-soon wishes and expressing their concern. Few fans are curious to know what the injury was.

Meanwhile, the actor had confirmed that “The Kapil Sharma Show” would go on a “small break” as he wants to focus on his family and spend some quality time with his newborn second child.

Namaskaar 🙏 we are blessed with a Baby boy this early morning, by the grace of God Baby n Mother both r fine, thank you so much for all the love, blessings n prayers 🙏 love you all ❤️ginni n kapil 🤗 #gratitude 🙏

8 In 10 Businesses Worried About State-Sponsored Cyberattacks