K-Drama True Beauty Episode 12: Jugyeong To Leave Suho And Seojun As Her Secret Is Out in Episode 13 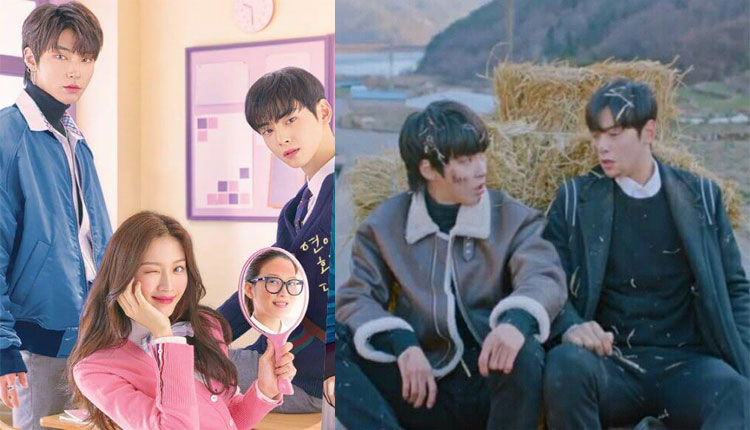 The 12th episode of True Beauty released yesterday followed closely by episode 10 which dropped on Wednesday. The latest episode left the audience with a major cliffhanger and a lot of sweet moments between Han Seojun, Suho, and Kim Jugyeong.

Episode 11 sees Suho (Cha Eunwoo) and Seojun (Hwang In Yeob) become friends again as they clear their past misunderstanding followed by a fun sequence where they are chased by gangsters. They end up falling in a pile of poop and later take a lorry where Suho asks if he is still in love with Jugyeong. Seojun replies that he is trying to get over it and won’t confess his feelings as she is his girlfriend. He also shares with Suho that Soo-jin might be the reason she might be upset.

Episode 12 of True Beauty 😭😭😭😭😭
I can’t wait till next week😭😭😭😭💔💔💔#TrueBeauty pic.twitter.com/KwkNhMiBDW

Meanwhile, Jugyeong is nervous that as her past schoolmate has also transferred to the school and she might reveal her secret. Soo-jin tries to be friends with that girl with ulterior motives. Soo Ah shares that Jugyeong has won the beauty competition on social media. She realizes that she has beaten her past school bully and gets very nervous.

Later Jugyeong loses her necklace given by Suho and Soo-jin finds it. Jugyeong searched the campus all over and even Seojun helps. Soo-Jin goes with the necklace to Suho and confesses her love for him throwing the necklace in the fire. A furious Suho leaves saying that she is only her friend and he will choose Jugyeong over her even if he knows Soo-jin after 10 years.

Soo-jin is deeply hurt and chooses the evil way as she meets Jugyeong’s old bullies and asks them for her old photos. The bullies also realize she is the same Jugyeong the bullied.  The bullies go to Kim Jugyeong’s house where Seojun finds them and he comes to know her truth from them. He defends her saying he is still prettier than them and breaks their phones.

The next morning when Kim Jugyeong walks in, her old pictures are leaked in the school and kids laugh at her. She runs away and even when Suho tries to help she leaves him. The episode has left at the cliff while the preview showcases she might leave the school as her mother cries releasing the bullying she faced and asks her to transfer if she wants. She is not even meeting Suho and Seojun, who seem like will come together to defend her.

THIS SCENE WAS TOO PAINFUL HOW COULD SOO JIN DO THIS TO JU KYUNG SHE WENT THROUGH SO MUCH SHIT AND NOW THIS I-#차은우 #TrueBeauty #TrueBeautyEp11 pic.twitter.com/mbsF7GMdVF

True Beauty premieres on South Korea’s top channel TVN. For the Indian viewers, the series is available on Rakuten Viki and other websites like Kissasian and Dramacool also stream it a day later for free.