Delhi Capitals opener Prithvi Shaw has become the talk of the town with his smashing performance in the IPL. He has been receiving all sorts of praise for his batting…

Delhi Capitals opener Prithvi Shaw has become the talk of the town with his smashing performance in the IPL. He has been receiving all sorts of praise for his batting but a special wish for him grabbed eyeballs, adding fuel to the romance rumors doing rounds about him.

While Prithvi hasn’t been vocal about his love life, his online interactions with actress Prachi Singh keeps the rumor mills churning. Netizens have been speculating about their relationship for quite some time now. Recently when Shaw led DC to victory against Kolkata Knight Riders (KKR) with a 41-ball 82 which earned him the Player of the Match award.

As he collected his award and spoke to the broadcasters in the post-match presentation ceremony, Prachi Singh posted photos of him on her Instagram to congratulate him.

With a picture of Prithvi Shaw speaking at the presentation, the first post was captioned, “So proud of you. The Insta story went viral adding to their relationship speculations. 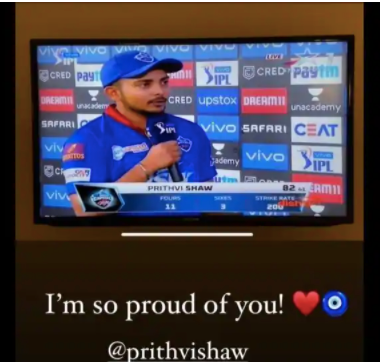 For those who are curious  about who Prachi Singh is, Prachi is a popular face in the telly industry. The actress debuted with the serial Udaan. Currently, the actress is working in a show titled Indiawaali Maa. Prachi is also a trained belly dancer and keeps posting her dance videos on her social media.