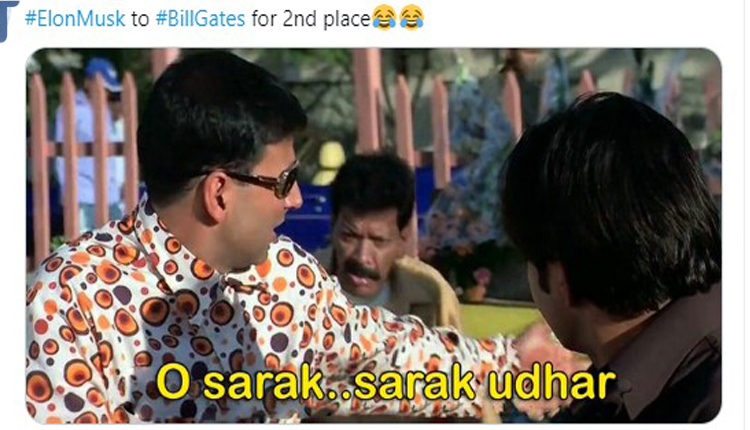 Elon Musk has now surpassed Bill Gates to become the second richest person in the world. The Tesla co-founder’s net worth has increased from USD 7.2 billion to USD 127.9 billion, toppling Bill Gates’ net worth which is at USD 127.7 billion.

Bill Gates was at the top spot for years before being overtaken by Amazon.com founder Jeff Bezos in 2017 who is currently the richest man in the world.

Now, a meme fest has broken out and the social media is flooded with Twitterattis sharing their hilarious reactions to the news. Thanks to the memers, Elon Musk is trending across social media today. The memes especially on Bill Gate and Jeff Bezos’ reaction are the funniest thing on internet at the moment.

Take a look at some memes which will surely leave you in splits.

#BillGates after seeing #ElonMusk as the 2nd richest person pic.twitter.com/1tubReOupY

#ElonMusk overtakes Bill Gates from 2nd position by his so much hard and smart work of years, in the richest section over worldwide 🌍

*Meanwhile, Berojgars tweeting this tweet from home and wasting time on these shits memes : pic.twitter.com/euyS2FzIQ6

#ElonMusk overtaken #BillGates and and become second richest person in the world.