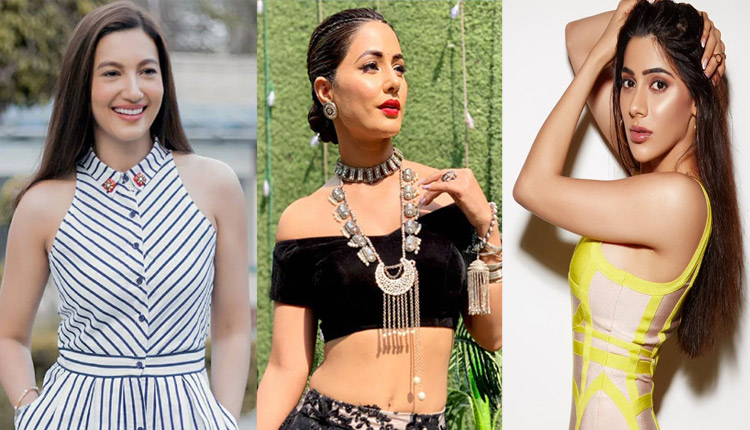 Mumbai: Celebrities always try to put their best fashion foot forward while appearing before the  camera. Bigg Boss, is no exception,  beyond the high dose of drama, fights and explicit language, the style quotient of its housemates plays an integral part in making a perennial hit.

The show in the last few years has now become a platform for celebrities to show off their fashion sense. Here’s are some of the celebrities who have kept the glamour intact and put their best fashion quotient on Bigg Boss over the years.

Nikki is one of the most talked about contestants this year. Not just because of her attitude but also her striking resemblance to American reality show personality Kim Kardashian West — courtesy her intricately-done lashes, well contoured face and perfect make-up.

Seems like Gauahar wanted to flaunt the inner fashionista in the show, and hence she was seen in the best of clothes and make-up during her stay. The shimmery gold thigh-high slit dress she wore the day she was feted with the winner’s tag is still fresh in everyone’s mind.

Small screen bahu Hina definitely can be called one of the biggest fashion icons of the show over the seasons. Even her nightwear was a point of discussion among many who were watching the show.

Apart from his good looks and chiselled frame, it was his hair that became iconic. Asim was definitely the stylish one in the 13th season. As soon as the season concluded, half of the nation’s boys were sporting Asim’s trademark look.

Many would say she was the boldest among the style divas ever. She went in flaunting a bald look and made bald look beautiful in the Bigg Boss house. Diandra brought back fascinators and headbands in vogue during her stay in the house. She made wigs seem easy to wear and carry, too.

Actress Shamita Shetty made her reality TV debut with the third season of the show. She was mostly seen wearing designer wear. Shamita, who is the sister of actress Shilpa Shetty Kundra, former host of Bigg Boss, made casual wear look cool in the house.

She was just there for three days and her stay in the Bigg Boss house created headlines in India. From sarees to sarongs, Pamela made everything seem sexy yet casual during her a short stint on the show.

From grunge to party dresses and Indian attire, actress Maheck Chahal, who created a tizzy in the house, rocked all of them. She is mostly remembered for her style and also her epic fight with fellow contestant Akashdeep Saigal.

Okay, he is one of the most controversial contestants ever, but he was also known for his eccentric fashion statements. From colourful clothes, to bright wigs and peculiar face masks, Imam would sport anything that let him stand out. He even got evicted because of his fashion statement, when he slipped into a nude colour bodysuit. He had an undergarment to cover his privates but he soon shed that, too.

She was in the first season, in 2006. Model Anupama had a natural style sense that combined elegance and oomph. She was loved for her perfectly trimmed long hair and her well-fitted clothes. From dresses, to jeans, to swimsuits and jackets, Anupama, who made a name in the fashion world, carried each ensemble with aplomb.

Netflix Free For A Weekend From December 5, Know Details Here