Bigg Boss 14: Rakhi Sawant Shocks Housemates As She Tattoos ‘I Love Abhinav’ All Over Her Body 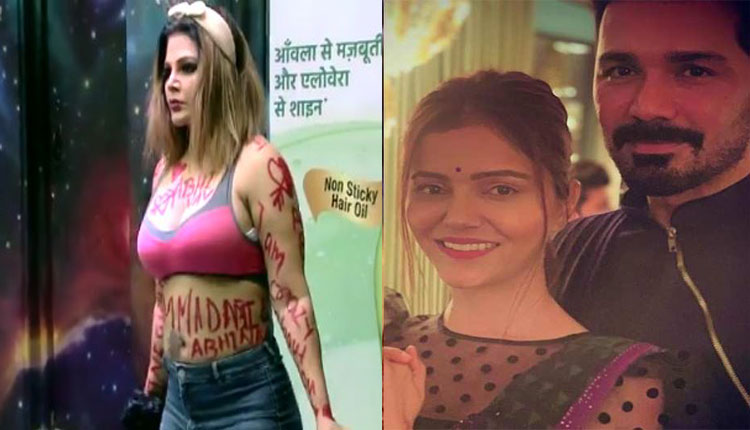 With each passing episode, Rakhi Sawant’s antics are getting crazier. Since the time she has entered Bigg Boss 14, she has been open about targeting Abhinav Shukla. While she keeps teasing Abhinav’s wife Rubina Dilaik with her antics as well, but this time she has left the housemates shocked.

The recent promo shows Rakhi telling Abhinav that Rubina will not be able to sleep if she (Rakhi) washes utensils with him. To this Rubina reacted saying, “Is tareeke ki baat mat kijiyega”. Rakhi gets angry over this and says no one can separate her from Abhinav after which she goes away.

After some time she comes back to the house with ‘I Love Abhinav’ written all over her body and face in red. She walks around the house saying she loves Abhinav the most as no one had tattooed his name before like her. She goes around confessing her love for him.

Rubina gets furious and she asks Abhinav not to entertain or encourage her, she says “She will cross her limits, now do not encourage.”. She later tells housemates “It is cheap entertainment, wo khud kharab dikhengi.”

Arshi Khan tries to make her understand that by doing all these stunts she is pushing Abhinav and Rubina away from them. But all to fail, she roams around saying she is crazy for Shukla and won’t let Rubina come in between.

Meanwhile, today’s episode will also witness some intense drama as nominations will be done on the basis of house portions of Bigg Boss 14 distributed to housemates.