Mumbai: Bollywood actress Athiya Shetty has shared a heart-warming birthday message for her rumoured beau KL Rahul on Sunday. She says she is grateful to have the cricketer in her…

She says she is grateful to have the cricketer in her life.

Athiya posted a string of pictures with Rahul on Instagram. In the images, the two are seen making goofy expressions as they pose for mirror selfies.

Athiya captioned it: “Grateful for you, happy birthday.”

The actress’s father and actor Suniel Shetty commented : “Truly” along with a black heart emoji.

While another commented: “your son-in-law Anna😂❤️.” 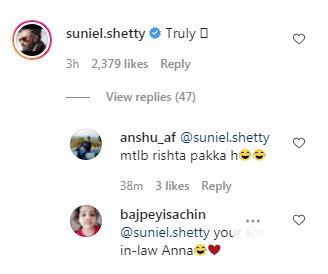 Rahul and Athiya have constantly shown love on social media. However, the two have not officially confirmed their relationship.

Though, affairs between cricketers and Bollywood celebrities are nothing new, the equation between KL Rahul and Athiya Shetty often seemed to be much more than ‘just friends’. The duo have never accepted to be in a platonic relationship. Earlier in January, Robin Uthappa’s wife shared a post on Instagram that sparked speculations of the duo being in a strong relationship.

Athiya enjoyed a pleasant dinner with KL Rahul and his sister Bhavana. The list of party attenders also included cricketer Robin Uthappa and his wife Shheethal, and Cricketer Sinan Khadir.

The Indian Cricketer is setting the romance speculations at rife with his comments and love-filled Insta stories for rumoured bae Athiya.

Earlier in February. Athiya shared a picture of her on Instagram adorning a lehenga. The look was stylish yet ethnic which mesmerise the fans. Rahul’s adorable comment on the picture clears the air that the cricketer was also lovestruck by her picture.

Rahul is currently busy with the Indian Premier League 2021 (IPL). He is the captain of the team Punjab Kings.

Athiya was last seen on screen in the 2019 film “Motichoor Chaknachoor”, a comedy-drama, which also stars Nawazuddin Siddiqui.

(With Inputs From Nitesh Kumar)