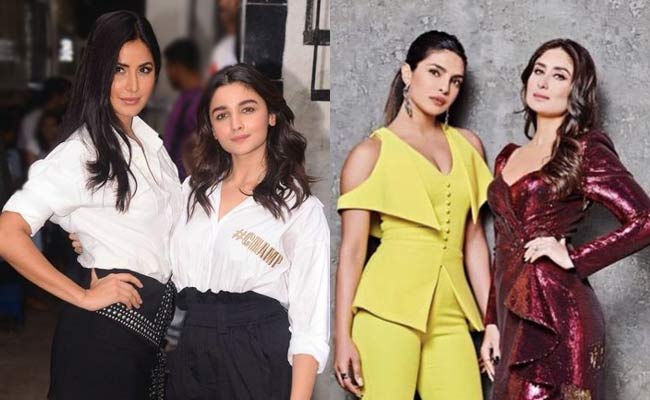 Alia Bhatt and Katrina Kaif became good friends when the former entered the film industry with “Student of the year.” They were supposed to be best friends in B-town. At that time the “Chikani Chameli” star was dating Ranbir Kapoor and the couple had even started living together. But after their breakup, the “Sanju” actor fell in love with Alia during the filming of “Brahmhastra.”

Even though Alia is now cozying up with her ex-boyfriend with whom Katrina had a very bitter breakup, the “Bharat” actress continued her friendship with Alia and even today, the two are sighted enjoying girlie time with each other.

Kareena Kapoor and Shahid Kapoor dated for around five years and were very close. No one expected them to break up. But during the shooting of “Tashan” Bebo fell in love with Saif Ali Khan and today she is his begum. After falling out with Kareena, Shahid dated Priyanka Chopra for a brief period. It is during this time rumors about the animosity between these two stars started floating. But the girls patched up during the show of “Koffee With Karan” last season and seemed quite comfortable.

Bebo even complimented PeeCee for her success in Hollywood and managing stint in both the film industries efficiently. The other two girls who dated the same actor briefly but still are on good terms are Anushka Sharma and Sonakshi Sinha.

Anushka and Ranveer Singh collaborated for “Band Baaja Baaraat” which was the first film of the “Padmavat” star. During the shooting Ranveer and Anushka developed a very strong bonding but by the time they had wrapped up shooting for “Ladies vs. Ricky Bahl,” they had drifted apart. Ranvir Singh, later on, started dating Sonakshi Sinha whereas Anushka was yet to find her lover boy Virat Kohli. Rumors suggest that Ranveer dropped Anushka and found happiness with Sonakshi then.

But today both the girls are on good terms and Sonakshi even congratulated Anushka when she married Virat Kohli.