Actors Who Changed The Content Game & Their Careers With OTT 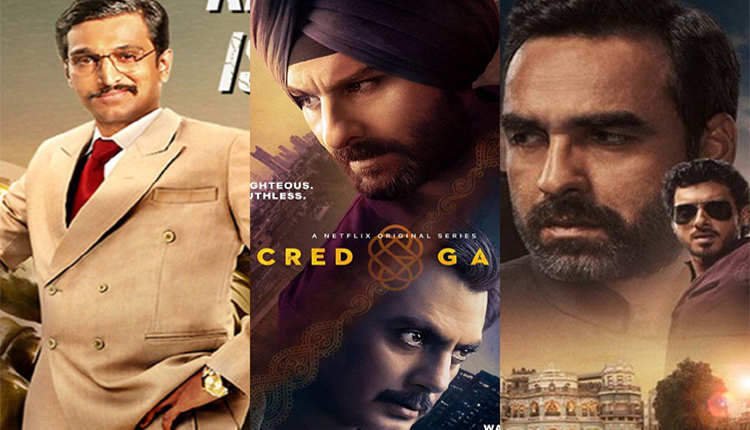 The boom of the digital medium in India not only revamped the way stories were told, content was produced but also the acting graph of some actors. The much greater freedom of content and fluidity of the audience on OTT made actors experiment with roles and themselves in a way never done before on the big screen.

We bring you a list of actors who resurged their careers all thanks to the OTT platform.

The actress, who was last seen in the 2015 Bengali film “Nirbaak”, made her acting comeback with a fierce avatar through the web series “Aarya”. The show is about how her protagonist Aarya is pulled into the narcotics business when her family is threatened. The series streams on Disney+ Hotstar VIP. Sushmita now looks forward to the second season of the show.

“The response to ‘Aarya’ has been overwhelmingly great. An entire team of fantastic people puts this show together and we knew we were creating something magical with ‘Aarya’. However, even we could not fathom the kind of response it has received. It has been a really heart-warming journey,” Sushmita says.

After hitting a rough patch with a string of failures in Bollywood including “Rangoon”, “Chef”, “Kaalakaandi” and “Baazaar”, Saif’s career got a breath of fresh air with “Sacred Games”, which brought him back into the action. He is now looking forward to another digital outing with the web show, “Tandav”.

After initially successful years, Bobby hit a rough stretch with his silver jubilee run. He started his second innings with much-hyped multistarrers like “Race 3” and “Housefull 4”, but these films did not help his career. Now, he has found a resounding return thanks to his starring role in the OTT series, “Aashram”. He was also the star of the Shah Rukh Khan-produced digital film, “Class Of ’83”.

She has earned widespread praise for her performance in web shows like “Lust Stories”, “Sacred Games”, and “Ghoul”. At present, she is hailed as the “queen of OTT platforms”.

“Some actors have got outstanding parts. All the OTT platforms seem to be working on big productions only. I hope it’s not just a transfer (of content) from Bollywood to them. Let’s wait for a year or two. Consistency can only be checked over time. Right now, the platform is superb. There’s no doubt about that. The budgets are great, production and systems amazing, and work ethics in the right place,” Radhika said.

“At the moment, the digital platforms seem to be giving women more court to play with many more and stronger protagonists,” she added. She was last seen in the film “Raat Akeli Hai”, which streams on Netflix.

In his Bollywood journey, he featured in films like “Rockstar”, “Gangs Of Wasseypur”, “Raees” and “Raazi”, but failed to get the acclaim and fame that came his way when he essayed the police office in “Paatal Lok”.

“People are admiring a police officer’s character who is fighting through a corrupt system trying to prove his self-worth and seek justice in a post-truth world. I even received messages from people saying that they could very well relate to the character and the struggle. It feels great to see your work being appreciated by people. It gives me a renewed sense of vigor to do more such brilliant work,” Jaideep said after the success of the show.

Few would still recall Amit as the college boy in the teen teledrama “Kyun Hota Hai Pyarrr”, or his emotional journey in the first season of the reality TV show “Bigg Boss”. His foray into Bollywood, with films like “Kai Po Che!” and “Sultan”, was applauded for his acting, but these films did not help him much when it comes to garnering the limelight.

That has happened in the OTT space. Earlier this year, Amit set a mini record in the OTT world, with as many as three releases on the same day. He had pivotal roles in the digitally-released films “Shakuntala Devi” and “Yaara”, and he also starred in the web series “Avrodh: The Siege Within”. He had made a mark with his role as a cop over two seasons of “Breathe”.

Pankaj was a phenomenon waiting to happen, given his abundant talent. Only, Bollywood didn’t quite have the roles after he made his mark with that small but impressive outing in “Gangs Of Wasseypur”. Rather, his real turnaround happened on OTT, as the dreaded gangster Kaleen Bhaiyya in the web series “Mirzapur”, and “Sacred Games”, where he played the power-hungry Guruji. The acclaim for his OTT sojourns has opened up doors across platforms. At the moment, he is seen as a gangster in “Ludo”, which is streaming on Netflix.

He was the cute college friend of Ranbir Kapoor in the 2009 film “Wake Up Sid”, but things didn’t take off after that. Rather, it was the digital platform that helped him prove his versatility. Namit, who started his journey on TV with the show “Pancham”, and got noticed with the TV series “Sumit Sambhal Lega”, has utilized the webspace to step out of ‘the good guy’ zone, notably with the show “Mafia”. He played Jawahar, a character with grey shades with aplomb in the web series “Aarya”, which starred Sushmita Sen. He also featured in the crime thriller “Abhay”.

Shriya began her movie career with the 2013 Marathi film “Ekulti Ek”. After “Un plus une”. Despite her presence in the Shah Rukh Khan-starrer “Fan”, she didn’t really get noticed. It was her role of Sweety in the web series “Mirzapur” that put the spotlight on her. She was also essaying interesting roles in the digital series “Crackdown” and “The Gone Game”.

He has been around for a while now and has impressed in films like “Mukkabaz” and “Saand Ki Aankh” lately. However, Viineet Kumar got a chance to showcase his versatility only after he forayed the webspace in recent months, with projects like “Bard of Blood”, “Betaal” and “Gunjan Saxena: The Kargil Girl”.

After “Lipstick Under My Burkha”, Aahana started exploring the digital space. She has featured in “Inside Edge”, “Rangbaaz”, “Marzi” and “Betaal”. She is now busy in a way she never has been when she tried exploring films and television.

He has many acclaimed projects added to his resume, from “Ship Of Theseus” to “Talvar”. However, he managed to reach out to a wider audience only after getting into the OTT space, with projects including “The Final Call”, “Sacred Games”, “Taj Mahal 1989”, “Paatal Lok” and “Avrodh: The Siege Within”.

(With Inputs From IANS)

BJP Marching Ahead To Form Govt In Odisha: JP Nadda