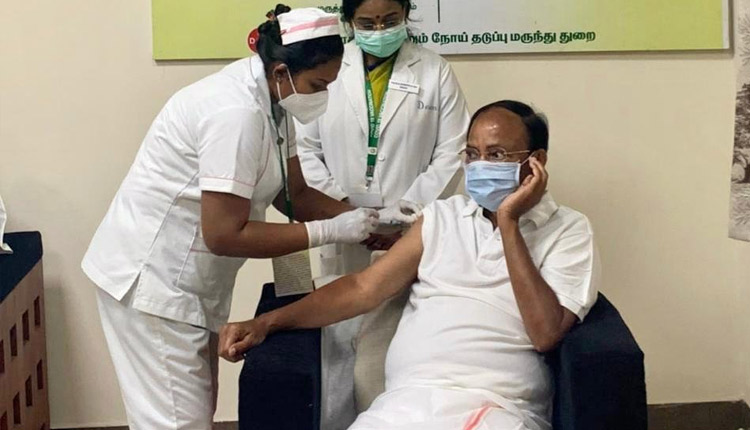 New Delhi: After Prime Minister Narendra Modi, Vice President M. Venkaiah Naidu has also announced that he has received the first dose of Covid-19 vaccine at a government hospital in Chennai, kicking off an expansion of the country’s immunisation campaign that began in mid-January with healthcare workers.

“I took my first dose of COVID-19 vaccine at Government Medical College, Chennai today. I will be taking the 2nd dose after 28 days,” the Vice President said on Monday in a tweet.

The Vice President, 71, appealed to the people to come forward and receive the vaccine to defeat the deadly virus which has infected over 1,11,12,241 people and claimed the lives of 1,57,157 people so far.

“I appeal all the eligible people to get themselves vaccinated proactively and join in the fight against novel coronavirus,” Naidu tweeted.

I will be taking the 2nd dose after 28 days.

I appeal to all the eligible people to get themselves vaccinated proactively and join in the fight against novel coronavirus. pic.twitter.com/mfA1xJXiGg

The Vice President took the first jab of the Covid vaccine after Prime Minister Modi– the first prominent leader to take a Covid vaccine shot on Monday, as nationwide vaccination of persons above 60 and those over 45 with illnesses began.

The Prime Minister’s vaccination at Delhi’s AIIMS hospital featured symbols from states that will vote later this month as he wore a scarf from Assam and nurses from Kerala and Puducherry — Rosamma Anil and P Niveda– administered him the vaccine. Niveda administered the vaccine while Rosamma was assisting her.

India, which has reported the highest number of Covid-19 cases in the world after the United States, has so far vaccinated more than 12 million health and front-line workers.

The country is now expanding its vaccination drive beyond healthcare and front-line workers, offering the shots to older people and those with medical conditions that put them at risk.

Those now eligible to be vaccinated include people over 60, as well as those over 45 who have ailments such as heart disease or diabetes that make coronavirus infections more dangerous.

The shots will be given for free at government hospitals and will also be sold at over 10,000 private hospitals at a price not more than Rs 250 per shot.