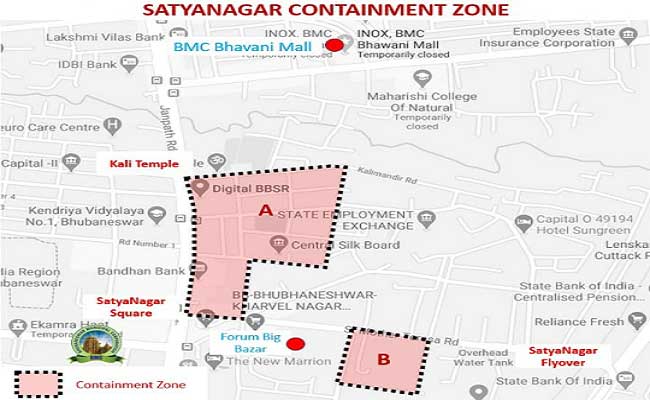 Bhubaneswar:  A day after Odisha’s first COVID-19 death was reported in Bhubaneswar, the Bhubaneswar Municipal Corporation (BMC) has declared Satya Nagar as containment zone after detection of a positive case in the area.

The areas which come under the containment zone include Kali Temple Square to Patanjali Store to BOI Officers’ Quarters and upto Satya Nagar Square via Missionary of Charities & Axis Bank.

“All the inhabitants within the containment zone shall strictly remain in home. All the shopping establishments of whatsoever nature shall be closed immediately. The supply of Essentials and medical requirements will be ensured through various teams formed by BMC,” reads BMC order.

While the government and private institutions located within the boundary of the containment zone will remain closed, BMC has assured to supply essentials and ensure medical requirements in the areas. The inhabitants have been asked to call Helpline no 1929 for any complaints.

Earlier, the BMC had declared Surya Nagar, Bomikhal, Sunderpada, and Jadupur areas of the capital city as COVID-19 containment zones.

Odisha reported its first COVID-19 fatality on Tuesday as a 72-year-old man infected with coronavirus died, informed Health & Family Welfare Department. The victim had died on Monday and the report confirming that he tested positive for the virus arrived on Tuesday. The man from Jharpada locality in Bhubaneswar was admitted to AIIMS on April 4 with complaint of respiratory distress.

Coronavirus cases get past 5000 in India, death toll rises to 149