• Sunil Saggar, CEO, Shanti Mukand Hospital, Delhi breaks down as he speaks about Oxygen crisis at hospital. Says, “We’re hardly left with any oxygen. We’ve requested doctors to discharge patients, whoever can be discharged…It (Oxygen) may last for 2 hrs or something.”

Air, air everywhere, but there is no air to breath… Yes this is the exact situation in the big cities like Delhi, Mumbai, Pune, Lucknow etc. of our country now. Thousands of patients are yearning for oxygen. People are standing in long queues with oxygen cylinders to refill to save the life of their near and dear ones. While somewhere serious desperate patients are sitting outside hospitals, their family and relatives are pleading to get them admitted to hospital but due to shortage of oxygen they could not do so. Hospital authorities are breaking down with tears, pleading government to provide oxygen. Chief Minister of the state (Delhi) is coming out with folded hand and requesting to the Prime Minister to support. The situation itself explains the gravity of the crisis. 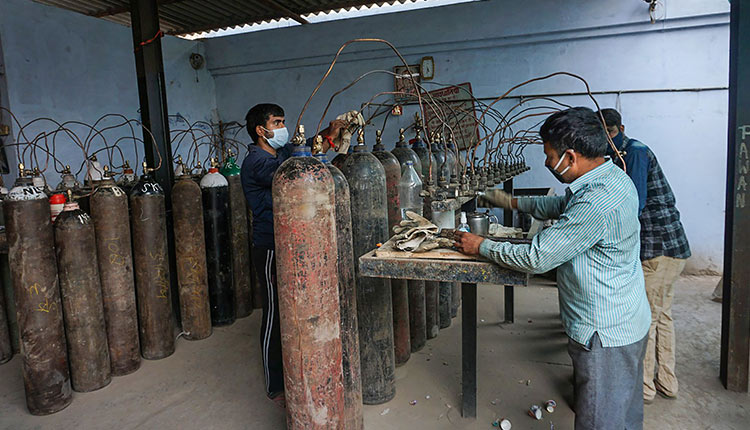 For the last 24 hours, Delhi based Shibani and her father has been running pillar to post with her 65-year-old mother who is Covid -19 positive. They are struggling hard to get her admitted in the hospital. But no hospital has a vacant bed and ICU to admit her. “Suddenly my mother fell sick and she was having trouble in breathing, so we took her on a car and tried in five hospitals to get her admit but none of them are agreed because all the beds and ICUs are filled up. Then we decided to take her to Ghaziabad hospital. Her oxygen level is going down. Here the doctor said that they are running out of oxygen so they can’t admit my Mom. They are telling if only I can arrange oxygen, they will admit my mother. From where will we bring oxygen,” she busted into tears.

It is not only Shivani, who is in such a helpless situation, but at present you can see hundreds of desperate patients and their family members outside hospitals striving for oxygen in Delhi. The situations in Mumbai, Pune, Lucknow and other cities are also as bad as Delhi due to shortage of oxygen.

Vinay Srivastava, 65, a senior journalist, from Lucknow repeatedly twitted to the Government of UP to help him because his oxygen level was going down but nothing could be done for him and he lost the battle against Covid -19 a couple of days ago .Srivastava suddenly took ill and his oxygen level tumbled to 52. Knowing the fact that Oxygen saturation below 94 is considered a matter of concern, he took to Twitter and wrote, “Doctors and hospitals in your state have all turned autocratic. I am 65 years old. I also have spondylitis. The oxygen level in my body has come down to 52. No hospital, lab or doctor is picking up my phone.” Next Morning his son Harshit Srivastava informed about the demise of his father and questioned, “Where are all the ambulances?”

Delhi Health Minister Satyendra Jain said that the situation is different in different hospitals and informed that some have stock for six hours, eight hours and 10 hours left and it’s not a good situation. He further said that for the last three days, there is an acute shortage of oxygen in Delhi. Center has increased Delhi’s quotas and allocating oxygen for all states.

“Earlier Delhi’s quota was less than the requirement, now it has been increased. If this crisis ends in a couple of days, the beds will be increased. There is also a shortage of ICU beds at this point of time. We have demanded beds from the Center; we hope that the center will give us 700-800 ICU beds soon. We had asked for 7000 beds for the government hospitals but only about 2000 beds have been received,” he said.

Just one week ago, the Central Government had said that India’s everyday consumption of Oxygen is 60% of its daily Oxygen production for medical use .That means, we are in a comfortable position.

On 15th April 2021 Health Ministry in a press statement said, “India‘s per day Oxygen production capacity is 7127 Metric tonnes. In addition to this, the Ministry claimed that there was a stocks in excess of 50,000 metric tonnes.

Out of 7127 Metric tonnes of daily production, a bulk of this produced oxygen dedicated to cryogenic air- a separator unit that manufactures high purity Oxygen.

On April 18, the Central Government asked the manufactures not to supply Oxygen for non Medical use but at the same time it exempted few industries. According to a report published at scroll.in, these industries are using around 2,500 metric tonnes of oxygen.

On 12th April, the country was having 12, 64000 active Covid cases and the medical oxygen requirement was 3,842 metric tonnes. But the Positive cases are on rise and the daily demand has raised to 8000 metric tonnes- means India requires about 70% more.

So, 50 thousand metric tonnes of Oxygen stock could not fulfill the gap between the demand and supply. This is the reason that Delhi High court urged the Central Government to stop providing Oxygen for industrial use and divert for medical purpose.

However, Delhi Chief Minister Arvind Kejriwal has informed to media that the Central Government determines the oxygen quota for each state. As many oxygen-producing companies are available across the country, the central government decides which state will get how much oxygen. Delhi needs 700 tonnes of oxygen every day. The central government had fixed 378 tonnes till yesterday, but yesterday, the amount was increased to 480 tonnes. That might help to control the situation. He also pointed out that as Delhi does not have a factory to produce oxygen, Delhi has to depend on companies from other states. At the time of commuting, some states have detained the oxygen trucks of Delhi quota. They want that they will use it in their own states first and then they will send them to Delhi. This is also the problem.

“I requested to our Prime Minister Modi ji to talk to the Chief Minister of such states where our trucks of oxygen were stuck off. I am thankful to Modi ji that he helped us and till now we have got 350 tonnes of oxygen. If more oxygen comes, the situation might improve,” Kejriwal is hopeful.