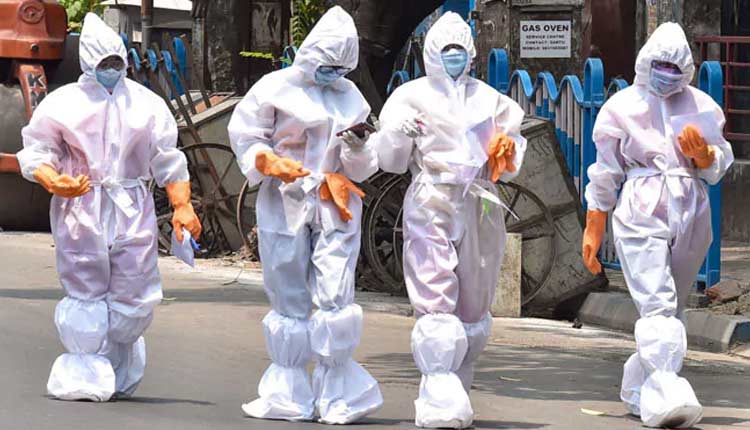 Total number of cases in the country now at 236657, including 115942 active cases, 114073 cured/discharged/migrated and 6642 deaths: Ministry of Health and Family Welfare pic.twitter.com/yYTRoDBO02

India is now the sixth worst-affected nation in terms of coronavirus infection cases after the US, Brazil, Russia, Spain and the UK, according to Johns Hopkins University data.

The number of active COVID-19 cases stood at 1,15,942, while 1,14,072 people have recovered and one patient has migrated, the Union Health Ministry said.

“Thus, around 48.20 per cent patients have recovered so far,” a senior health ministry official said.

The total confirmed cases include foreigners.

Of the 294 deaths reported since Friday morning, 139 were in Maharashtra, 58 in Delhi, 35 in Gujarat, 12 each in Tamil Nadu and Uttar Pradesh, 11 in West Bengal, eight in Telangana, seven in Madhya Pradesh, five in Rajasthan, two in Andhra Pradesh and one each in Jammu and Kashmir, Odisha, Punjab Jharkhand and Uttarakhand.

The death toll reached 57 in Karnataka and 48 in Punjab.

Jammu and Kashmir has reported 36 fatalities due to the disease, Bihar has 29, Haryana has 24 deaths, Kerala has 14, Uttarakhand has 11, Odisha has eight and Jharkhand has reported seven deaths so far.

Himachal Pradesh and Chandigarh have registered five COVID-19 fatalities each. Assam has recorded four deaths, while Chhattisgarh has reported two deaths so far.

Meghalaya and Ladakh have reported one COVID-19 fatality each, according to the ministry data.

Punjab has reported 2,461 coronavirus infections so far, while Assam has 2,153 cases. A total of 1,699 people have been infected with the virus in Kerala and 1,215 in Uttarakhand.

Ladakh has 97 COVID-19 cases, Nagaland has 94, Arunachal Pradesh has 45, while Andaman and Nicobar Islands and Meghalaya have registered 33 infections each.

“8,192 cases are being reassigned to states,” the ministry said on its website adding “our figures are being reconciled with the ICMR.”

State-wise distribution is subject to further verification and reconciliation, it said.

Covid-19 Odisha Lockdown: Owners be allowed to walk pets outside, Animal Welfare Board requests all States